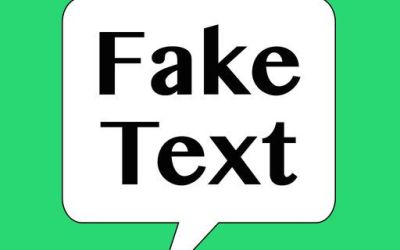 The act of sending and receiving fake text messages has grown even more popular in the era of memes. You now have the ability to change what someone says in a text and resend that text making it look as if it were coming from a different phone number. This means that the recipient will think the text was sent from someone else.

There is also the benefit of receiving a fake text while bored during a meeting or social event. You could make it so that you receive a fake text emergency which needs your immediate attention in order to ditch out on the situation. Essentially, fake texting enables you to plan a quick escape route when you really need to get away. Pretty slick, huh?

There is a slew of next-gen apps and text generators on the web for you to take advantage of the craze. Every message sent from one of these apps remains completely anonymous meaning the receiving party will never know who really sent it. Just know that the same thing can be used against you at some point and you may never even have a clue.

Technology continues to advance at such a rapid rate that it pays to be careful with things such as these. However, if you want to get in on the fun, I’ll go over a few different fake texting websites and applications you can take advantage of right now.

Feeling a bit cheeky? Need to escape a “bored out of your skull” situation? A fake text message may be just the cure you’ve been searching for. Below, there are a few websites that offer up an anonymous free texting service. Just a bit further down, you’ll find a few apps for your mobile device that will offer the same services. How you choose to use the services offered is entirely up to you.

iFake is a tool that depicts any message you send as a text from an iPhone. The site allows you to change a few details, such as the current battery percentage, the name of the sender, and the color of the text bubble that the message will pop-up in. The message preview can be found at the bottom. This allows you to know exactly how the message will look on the recipient’s phone.

There is even a tutorial that you can click through in order to better understand how to use the site. Once you’re finished with all ofhttps://www.novodasoftware.com/ that, just type in the text message and click the Create Image button to have it sent out.

Another fake text generator made to appear as sent from an iPhone. iPhone Fake Text offers a similar service as iFake just with a few additions. On top of the ability to add a name of the sender, you also have the option of adding a date and time of message sent. This is great for anytime someone has sent you a message you never bothered to read. You can resend a similar message back to the original sender claiming the text was never sent.

Other differences include changing the service provider, network coverage, signal level, and GPS.

If you couldn’t tell by the link, this one is yet another fake text service that mimics an iPhone. This one has an actual iPhone image lending to a more authentic fake message. It comes with all the standard bells and whistles of those mentioned previously. You can choose between either iOS 7 or iOS 8 when it comes to the image. This site offers a few more choices when choosing your connection type but other than that, it’s all pretty normal.

Finally, we get to hit on a website designed for Android users. The site is almost identical to what you’d find with iFake Text Message. The differences come into play with the ability to add both an incoming and outgoing text message. It’s also more keen to look like it came from a genuine phone by enabling Wi-Fi, Airplane Mode, Alarm, Vibrate, Do Not Disturb, and Bluetooth toggles.

Just like iFake, it too comes with a tutorial if you feel you need further explanations for how to use the service.

This site requires that you purchase credits in order to send out fake text messages. You may be wondering why you would want to pay when you can use any of the above-mentioned services. Spoof My Text creates fake messages using whatever service provider that is supported in your region. This means that you can create both fake texts as well as fake phone calls.

It’s a really good service that will automatically make the text appear as it should for whatever phone the recipient currently has.

Now, this service is a bit different than the rest on this list. Instead of sending your own message, Spoof Box offers up what it calls “trash cell phone numbers” that appear as annoying subscriptions. Basically, when you send a fake text, it will appear as if the recipient has signed up for something they won’t remember signing up for. Of course, that’s because they didn’t, but they won’t know that. Sign your friend (or enemy) up for a bunch of fake courses, fitness programs, vehicle transportation services, and much more. The possibilities are endless, as is the hilarity.

One of the best fake text apps available on the Google play store, Fake Text Messages is completely free. Just download and install this great app onto your Android phone and begin sending free anonymous SMS to whoever you want.

It takes just one click to easily send out a fake message to anyone that resides in the US. It must be in the US as the service uses actual US-based phone numbers for its shenanigans. A passcode will secure your conversations so that prying eyes will never know what you’re up to while your phone is left unattended.

Smiley Private Texting isn’t just for sending fake messages. Its primary purpose is for anonymity, replicating the use of a burner phone. You can send prank messages but also use the service for other things that you may not want to use your actual phone number for.

Smiley uses real US phone numbers so it will only work within the US. You won’t have to signup for a thing. Just download, install, and get to texting. Also, any response received by the “target” will not incur a data fee with your service provider.

Here’s one more app for the underrepresented phone model on this list, Android. Not as highly rated as Fake Text Messages but also not restricted to US only phones. I Am Not Me offers up international support on top of scheduled messaging, usable templates, receipt notification, and a few free credits the first time you install the app.

Messages are sent and received much faster than most services and are not tracked by the service itself. This means nothing is being saved on a site somewhere that could cause any messages sent to come back and bite you later.

Each of the fake text services mentioned in this article are considered some of the best that you can find. Understand that by using these services, your intent must remain within the laws of the country you reside in. The service itself is not liable for any fraud claims or committed offenses you may face by using them for unsavory practices.

Any illegal activities undergone through the use of these services will find you facing punishment to the fullest extent of the law. These services were meant for harmless fun and pranking, so use them correctly and have fun.