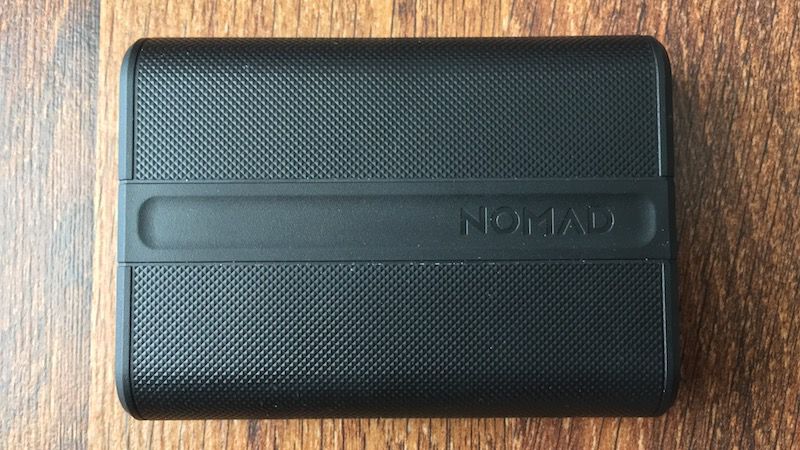 Nomad has been a well-known third-party Apple accessory manufacturer for a few years, creating leather cases for iPhones and iPads, Apple Watch bands, and battery packs that integrate directly into charging cables. The company’s newest product is the $99.95 Nomad Advanced Trackable PowerPack, a 9,000 mAh mobile battery that is built with Nomad’s usual “ultra-rugged construction,” with an added bonus of Tile integration so users don’t have to worry about misplacing the PowerPack.

The PowerPack is created out of a durable, polycarbonate frame that Nomad says is inspired by the manufacturing processes found in industry-leading, drop-resistant iPhone cases. Living up to the company’s adventure-focused mission statement, the PowerPack has an added layer of thermoplastic polyurethane, which gives the PowerPack its ultra-rugged, grippy feel.

The quality of Nomad’s PowerPack is the accessory’s first noticeable advantage: the raised texture that houses most of the pack is satisfying to grip, and the smooth section in the center — with the Nomad logo — provides a natural groove to place a thumb when handling the PowerPack. The downside of the texture is that it is definitely a dust and debris magnet, as can be seen in the pictures I took for the review, which represent the cleanest state I could get it in.

For ports, the device comes with two fast-charging 3.0A USB-C ports (one to charge the PowerPack, one to charge a separate device), and one 2.4A USB-A port that supports all of the standard-issue USB charge cables that come with most smartphones and tablets. In the box, customers will get a USB-C to USB-A cable to recharge the PowerPack, but they will have to provide their own smartphone charging cables.

In between the three ports is an LED indicator that uses three dots to display battery levels of the PowerPack’s 9,000 mAh battery, with a button underneath to bring the LEDs to life, and on the very right of the pack’s front is a button to sync with the Tile app. The opposite side of the PowerPack is coated with a glossy black surface, and its underside has the usual model number readouts and device information.

The battery performance of Nomad’s PowerPack proved to be reliable over the weekend as I tested it out. Starting at around an average of 21 percent battery life on my iPhone 6s Plus, the PowerPack topped off the iPhone to the mid-90 percent range three full times. The PowerPack finally died mid-way through the fourth charge (my iPhone climbing from 20 percent to 45 percent), meaning that Nomad’s promise of 3.5 charges is pretty much exact.

The 2.4 amps of the USB-A port means that the iPhone also charges a bit faster than Apple’s current 1A iPhone charger. It’s more along the lines of charging an iPhone with an iPad’s wall charger, which are up to 2.4A with the newest generation of Apple’s tablets.

My only real complaint with the PowerPack’s design is that it’s sometimes cumbersome to judge the battery level when multiple cables are sticking out of the pack. At one point I had both a USB and USB-C cable plugged into the PowerPack, and having to angle everything to tap the battery level button became quite finicky. Although the innards of the PowerPack’s design most likely excuse every port and bunovodasoftwaretton being located on one panel, having at least the LED on the opposite side of the case would have made the PowerPack more user-friendly. 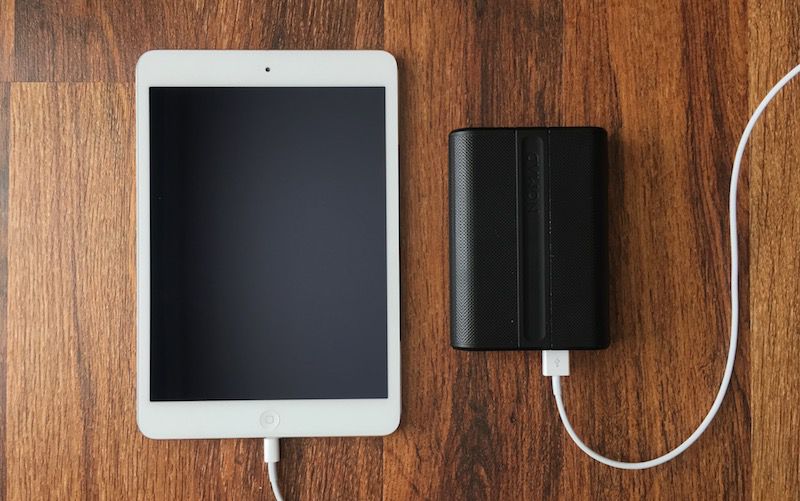 In regards to USB-C charging, the only relevant device I own is an early-2015 MacBook, which isn’t exactly in the target group of products compatible with the PowerPack’s 9,000 mAh battery capacity. Nomad says that with the growing adoption of USB-C, the PowerPack will work “well into the future,” but many Android smartphones out now could use the port, including Google’s Pixel Phone. There’s also the option of purchasing a USB-C to Lightning cable, which Apple sells, to turn the PowerPack into a dual-charging iPhone system.

A smaller, but admittedly useful feature is called AmbientIQ and it reads the light levels of wherever the user is currently located, and adjusts the battery LEDs appropriately. This way battery life can be confirmed in bright sunlight or, to Nomad’s point, remain at low levels in a dimly lit room while the PowerPack is charging at night (the LEDs remain on constantly while the pack charges, but otherwise turn on at user discretion while out and about). As someone who has come to figure out crafty ways to block out the electronic lights of everything from my router to my television’s HDMI splitter, the PowerPack’s included AmbientIQ solution was useful and welcome.

For those who haven’t heard of Tile, the company’s line of small, Bluetooth-enabled tracking devices lets users easily find misplaced keys, backpacks, laptops, tablets, and more. Tile sells the Tile Mate as the main keychain accessory and Tile Slim for wallets and laptop cases, and now the Nomad PowerPack comes with Tile’s integrated iPhone-connected tracking technology. Because of its integration into Nomad’s rechargeable pack, users also won’t have to worry about Tile’s “reTile” program, which offers discounts on the trackers when they lose battery after about a year.

I had never used Tile before testing the PowerPack, and I’ve come to enjoy the Bluetooth-tracking system, although there are some hurdles to its setup. Out of the box, the PowerPack refused to sync with the iOS Tile app, which I eventually remedied by juicing up the PowerPack from its low battery shipping state. Even with a full charge, it still took a few tries, but my iPhone eventually recognized the PowerPack and began tracking it. 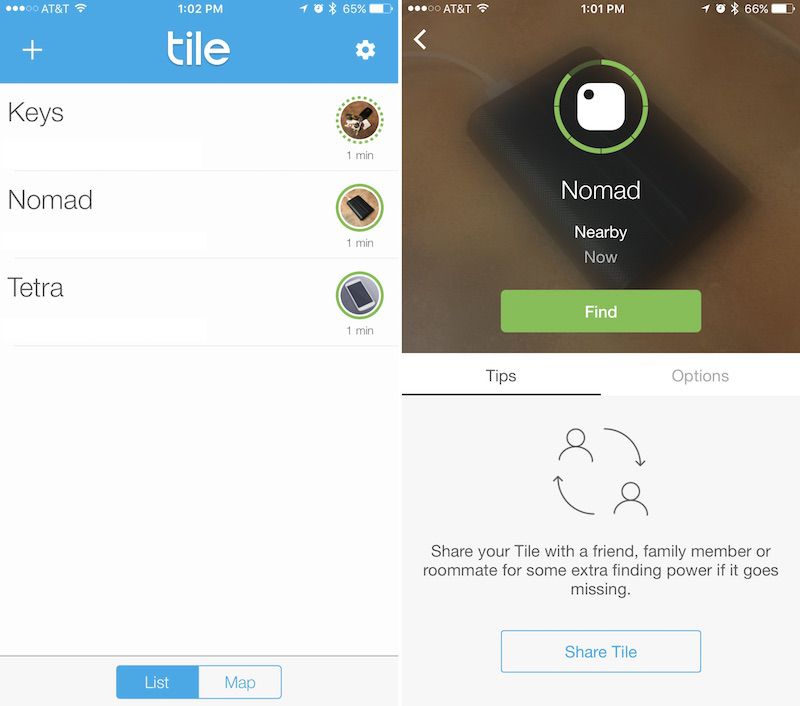 The Tile app works by presenting each Tile in a list, which can be expanded with a map view showing all of the last known locations of the trackers. Users can “ring” each Tile when they get near it — sort of like how Apple Watch can blast a connected iPhone when it’s lost — and also use a circular grid that fills up when they’re hot on the Tile’s trail, and loses segments as they get colder.

I’m not one to continually misplace my electronics, but in the week I’ve been using the PowerPack and Tile I’ve come to enjoy the backup safety net that the latter company offers with its partnership with Nomad. The circular tracking feature is neat and largely accurate, and the loud ringtones (five are available to choose from) are clear and distinct. If I were to ever misplace the PowerPack, I’m confident Tile would help greatly in recovering it, battery levels of the PowerPack permitting.

The biggest drawback of the PowerPack is its $99.95 price tag, which is likely raised due to the integration with Tile. Around that battery capacity range, there are a few low-cost alternatives by companies like Anker, which sells a 10,000 mAh battery pack for $49.99 (although it’s discounted to as low as around $20 now). Users willing to spend $100 can also get much more capacity from Mophie, a popular battery pack and smartphone case manufacturer, which sells the Powerstation XXL at the same price as the PowerPack for double the capacity at 20,000 mAh.

If you’re not someone who consistently finds themselves losing electronics, then Tile’s services, while noble and mostly functional, can feel superfluous. Those users should probably look elsewhere for a more bang-for-your-buck battery pack option. However, if Bluetooth tracking is a legitimately enticing addition to a mobile battery in your eyes, the Nomad PowerPack is a dependable solution, and could end up being a lifesaver for some.

Cons
– On the other hand, Tile will be pointless for others
– High price for middle-tier capacity
– Slightly cluttered port side

The Nomad PowerPack can be purchased from hellonomad.com for $99.95, with current orders estimated to begin shipping after Christmas on December 30.