A few months ago, the 2019 Lexus ES became the first vehicle from Toyota’s luxury brand to add support for CarPlay, built on top of the brand’s Enform 2.0 infotainment system, and Lexus now has a half dozen 2019 models announced with CarPlay support.

I’ve had a chance to spend some time with a Lexus ES 300h Ultra Luxury hybrid model that includes a number of technology features, so here’s a look at what iPhone users can expect now that Lexus is rolling out CarPlay support. 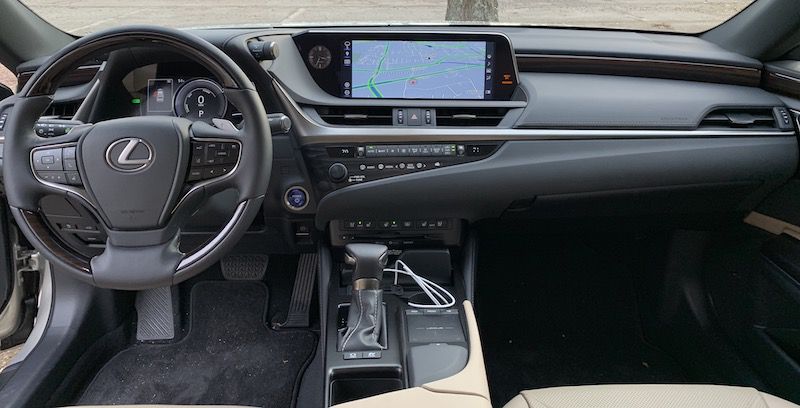 CarPlay support comes standard on all ES models starting from October production, and the base ES infotainment system comes with an 8-inch color display that can use a tethered smartphone with the Scout GPS Link service to provide navigation. My test vehicle, however, was equipped with a Navigation Package that boosts the center display to a 12.3-inch widescreen palette and provides native onboard navigation capabilities.

Widescreen native navigation
This widescreen display offers a choice of an ultra-wide view of main apps within the Enform system like navigation or a split-screen view to put a traditional size navigation pane alongside an audio pane, for example.

The 12.3-inch display on the Lexus ES makes it one of the few vehicles on the market, along with some models from the likes of Mercedes and Alfa Romeo, to support widescreen CarPlay, which takes over the entire display. While most users are familiar with the traditional 4×2 grid of icons for the CarPlay home screen, with a wide enough display as in the Lexus ES with navigation, the CarPlay interface will actually increase this to a 5×2 grid.

CarPlay home screen
Individual apps are of course also optimized for the large screen, which means you’ll get an encompassing view of what’s ahead of you in Apple Maps and other CarPlay navigation apps.

CarPlay Apple Maps
Music apps and more are also expanded to fill the screen, but the extra real estate really isn’t of much benefit as it typically results in more padding and blank space rather than being able to display additional content.

CarPlay “Now Playing” screen
This widescreen CarPlay interface, while offering some benefits with the increased scope of view, does have some drawbacks. The primary one is that with CarPlay taking over the entire display, you don’t have a simultaneous view of other apps from the Enform system such as audio. You can configure the digital driver’s display to show some audio information such as the radio or SiriusXM stations and song titles, but this view is pretty limited.

Driver’s display with audio info showing at left
Unlike the Acura RDX I reviewed that limits CarPlay to taking over the left three-fourths of the display while maintaining a view of key Acura infotainment functions in the right display pane, there’s no ability to do this on the Lexus. Ideally, full screen or partial screen would be a user preference, but that’s simply not how it works in either the Acura or the Lexus, with the two brands opting for opposite solutions.

The giant 12.3-inch widescreen (as well as the smaller standard 8-inch screen) is not a touchscreen, which makes reasonable sense considering just how far the driver would have to stretch to reach the right side of it. As a result, Lexus has opted for a Remote Touch trackpad interface and associated hardware buttons down on the center console within easier reach of the driver. 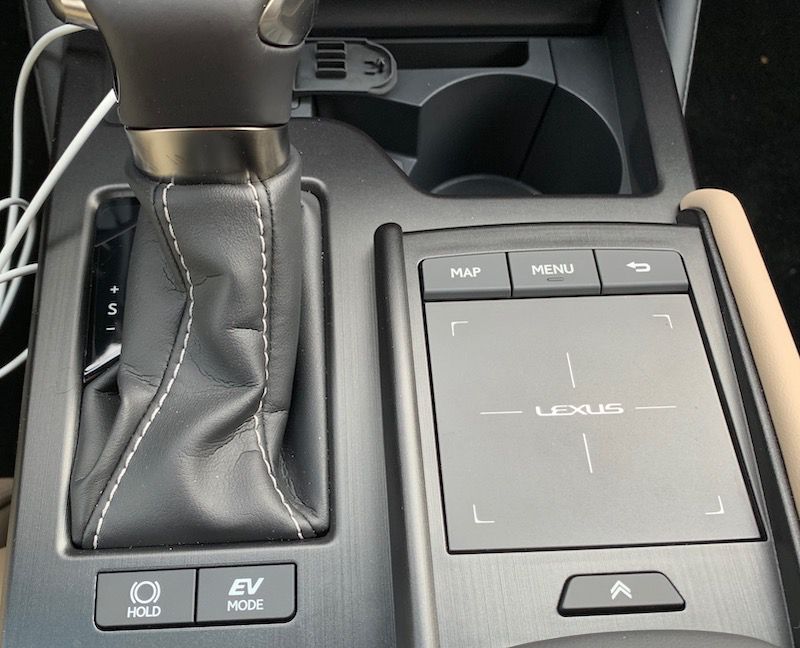 Remote Touch trackpad on center console
The previous joystick-style Remote Touch interface used by Lexus has been the subject of significant criticism, and while the trackpad may improve things a bit, it’s still a bit of a chore to use. The system does not use absolute positioning as in the Acura, so navigating around the Enform interface on the Lexus requires dragging your finger around on the trackpad to get the cursor where you want it and then pressing or double tapping on the trackpad to register your selection.

The system offers both haptic and audio feedback as the cursor lands on clickable items, which some may consider helpful but which I found to be a bit much. Fortunately, these can be turned off entirely or the volume/haptic strength adjusted.

The trackpad does support some gestures including pinch-to-zoom on the Enform system’s maps (but not CarPlay), double tap (equivalent to press), and flick (to quickly scroll lists or pan Enform maps), but it’s still a somewhat limited substitute for the intuitiveness of direct touchscreen manipulation.

Dock-style main menu
Hardware buttons above the trackpad offer quick access to the navigation app, the main menu (which slides up from the bottom like a dock rather than taking you to an entirely different screen) and a “back” function to walk you backward out of your current location within the app and settings hierarchy. Below the trackpad is a single button labeled with an inverted double chevron that provides a supplemental function depending on where you are in the system and is only occasionally active. 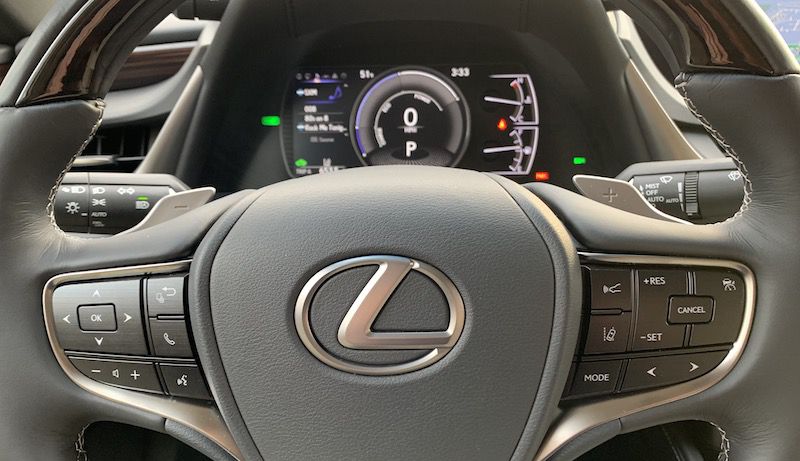 Steering wheel controls with talk switch at lower right of left cluster
As is typical, voice access to CarPlay via Siri can be controlled using a talk switch on the steering wheel, with a short press bringing up the Lexus voice assistant and a long press activating Siri.

The wired CarPlay connection is managed through a pair of USB ports near the front of the center console in a section that can be hidden by a pop-up cover when not in use. Two media devices can be connected to the Enform system simultaneously, but if either of them is an iPhone connecting as CarPlay, the other USB port becomes charge-only. 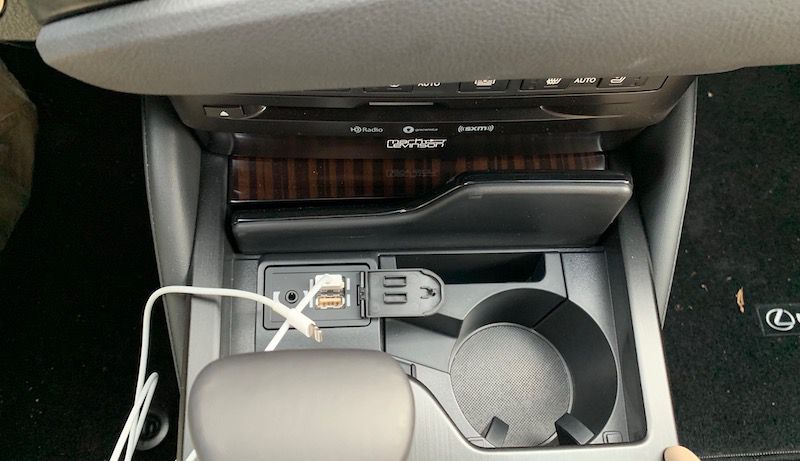 USB ports in center console
To the right of the USB ports is a cavity with a removable plastic insert that divides it into a cupholder and a narrow upright phone slot. You won’t be able to see much of your screen when your phone is in the slot, but otherwise it can be a convenient, space-saving place to put your phone, provided your phone fits. 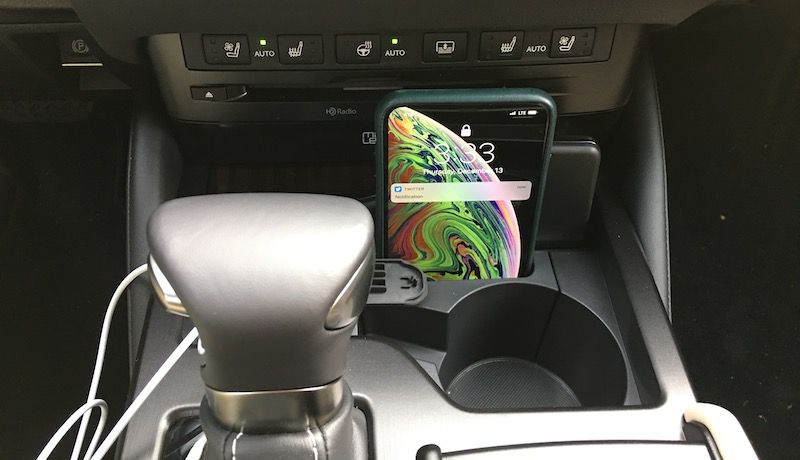 Upright phone slot in center console
The slot holds my iPhone XS Max in an Apple case in the normal position with essentially no room to spare. If I want to have the phone plugged in for CarPlay or charging and need to place the phone in the slot upside down, it doesn’t fit due to the slight protrusions of the volume and power buttons on the upper part of the phone. A smaller phone model in a thin case would fit just fine though. 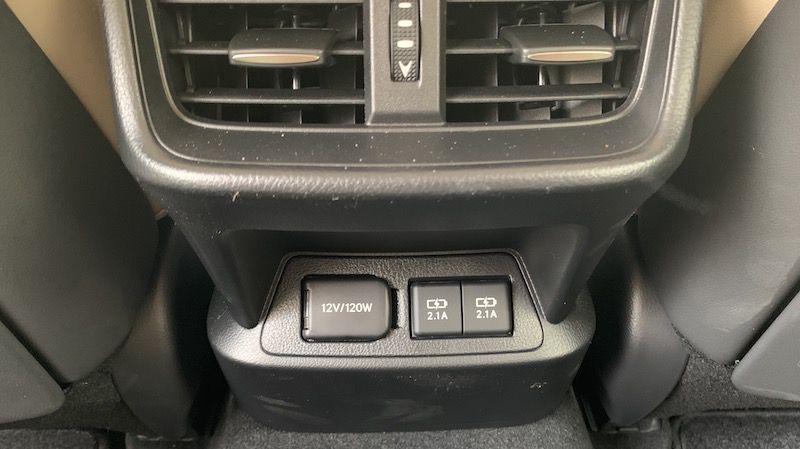 While Lexus’s CarPlay implementation is wired, the ES does have an optional Qi wireless charger, although it’s tucked away inside the center console compartment. It keeps your phone secure and hidden away, but for those who prefer a charger more out in the open where it’s easy to toss the phone onto it as you sit down and grab it as you exit the car, the compartment location makes things a little more inconvenient. 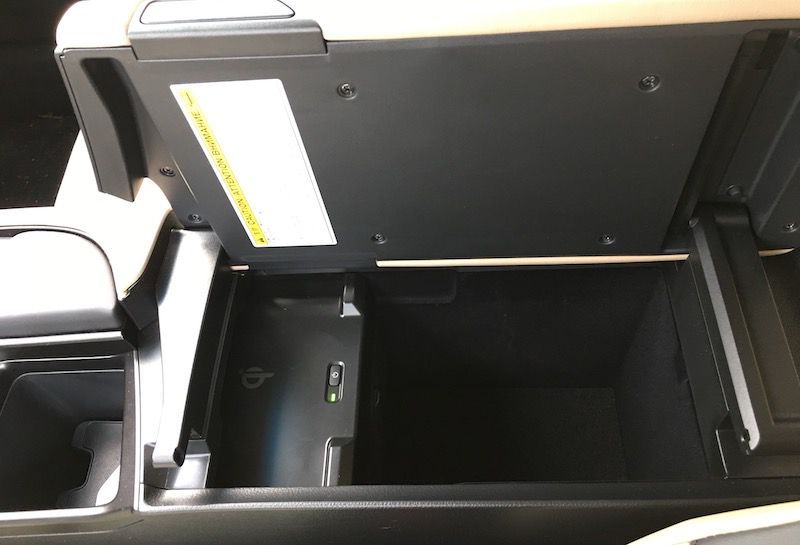 Qi charger in center console compartment
Even more so, the wireless charger is a tray that’s partially tucked under the front lip of the center console with only a small amount of vertical clearance, and the charger isn’t particularly large. I have an iPhone XS Max with an Apple leather case on it, and my phone just barely fits on the charger. I have to carefully slide it under the lip of the console compartment to get it onto the charger, and then it takes a little bit of maneuvering to get the phone out again. 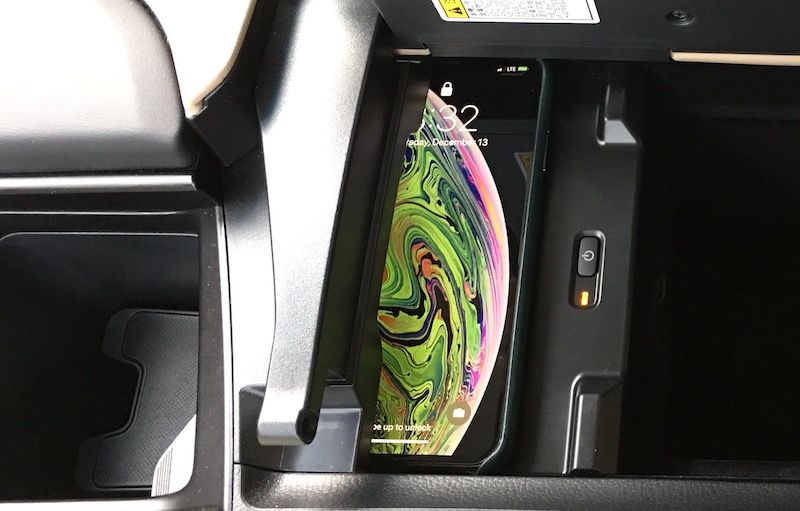 Phone charging on Qi charger
Smaller phones would have a bit more room side to side, but if you’re using a thicker case you can likely forget about using the wireless charger. At least for my phone, the tight fit certainly ensures the phone remains secure on the charger, but overall there’s just too much of an effort required to get my phone on and off the charger when quick and convenient is my primary goal in using a wireless charger to begin with.

The wireless charger is a standalone option on all trims, but its $75 price tag is remarkably cheap compared to some other manufacturers that are charging more like $300 or even as much as $500 for the option.

CarPlay on the new Lexus ES has some novel attributes, but overall the experience leaves a bit to be desired. The widescreen CarPlay experience is definitelynovodasoftware something different compared to most other manufacturers, and the expansive view of CarPlay navigation apps is very nice. But other CarPlay apps can’t really take advantage of the extra screen real estate, so the benefits are limited. The widescreen CarPlay also comes at a cost when there’s no option for a split-screen view that would let you see information from both CarPlay and the Enform system side-by-side.

Trackpad infotainment control systems are hard to get right in an age when we’re so accustomed to direct manipulation on our iPhones and iPads, and I feel like the Remote Touch interface in the Lexus ES isn’t the best implementation out there. Navigating around the large screen via trackpad is cumbersome, and while the Enform system helps a bit by snapping to available UI actions as you get close, you don’t get that assistance when using CarPlay.

Wireless charging is becoming more and more prevalent in vehicles, but it’s frequently slow and in the case of the Lexus ES it’s not particularly convenient to use with it being a tight fit tucked away in the center console compartment. And of course, it feels like a missed opportunity to not offer wireless CarPlay, although it’s hard to put blame uniquely on Lexus considering BMW is the only manufacturer that has managed to roll it out.

The 2019 Lexus ES starts at $39,600, but if you want to max out your trim and options to get all of the goodies like a hybrid engine, premium audio/navigation package, and more, you’ll be approaching $55,000.

CarPlay is thankfully included on all trims at no additional charge as of October production, so as long as you don’t end up with one of the first ES vehicles to roll off the line, you’ll be good to go. If you want the widescreen 12.3-inch center display rather than the more traditional 8-inch screen, you’ll need to add several options and packages, including the Navigation Package, that total around $4,500 at a minimum.