The Jetta is popular with car buyers looking for a cost-efficient daily commute vehicle, and the new Jetta starts at a little under $19,000 but can rise to around $27,500 if you opt for the high-end SEL Premium trim..

I spent some time testing out a relatively modestly specced 2019 Jetta SE, which is the second lowest of the five available trims and starts at just over $22,000 before any additional options.

VW offers three different infotainment systems across the Jetta trims, starting with the 6.5-inch Composition Color system on the S, SE, and R-Line trims and moving up to an 8-inch Composition Media system on the SEL trim that adds features like voice control, CD player, and premium Beats Audio in addition to the larger screen. On the top-level SEL Premium trim, you’ll find that same 8-inch screen but with what VW calls its Discover Media system that includes built-in navigation. 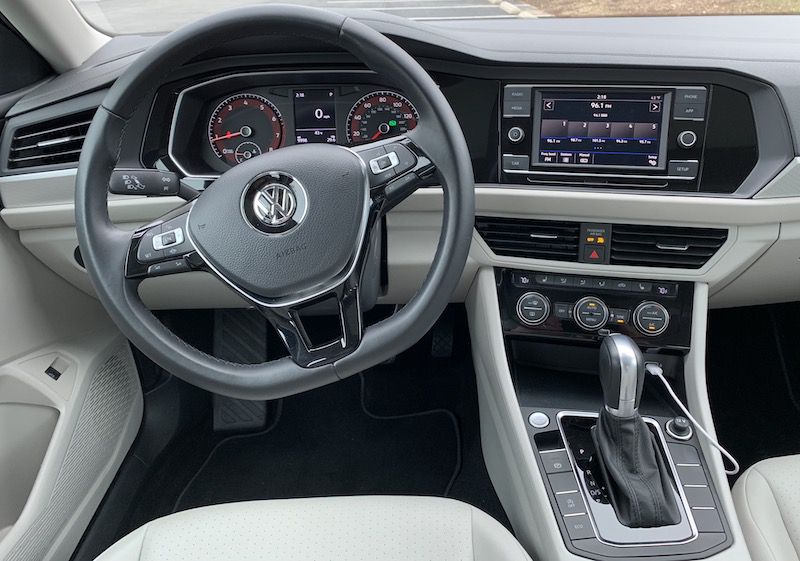 As an SE trim, my test vehicle came with the 6.5-inch Composition Color system, which gave me an opportunity to see what a buyer with a relatively modest budget can expect to experience in a Jetta.

On its own, the Composition Color system is pretty basic. It includes AM/FM radio, Bluetooth and USB connectivity for media sources, Bluetooth phone support, and some vehicle efficiency data.

Main FM radio screen on Composition Color infotainment system
There’s no SiriusXM and no embedded navigation, but what it does have is VW’s Car-Net App-Connect that’s standard across the lineup, and that means support for CarPlay and Android Auto, which I’ll get to shortly.

Connection screen for ‌CarPlay‌, Android Auto, and MirrorLink
The Composition Color system is simple and easy to use, with large icons for changing radio presets and making other adjustments. The user interface design isn’t very exciting, as it’s mostly white on black with a bit of accent color here and there, but that’s partly due to the simple functions it offers.

FM radio station list for browsing
On higher-level trims with the Composition or Discover Media system, the general look is the same but you’ll see a bit more color in appropriate places like channel logos on the preset buttons in SiriusXM.

Playing audio from a phone via Bluetooth
The screen has a matte finish that does a decent job of minimizing glare and fingerprints, although the hardware buttons surrounding the screen tend to pick up a bit of visible oils from your fingers.

Speaking of those hardware buttons, they represent a straightforward set of options that eliminates the need for any sort of home screen on the system. Radio and Media buttons at the top left let you jump straight to the radio controls or change audio sources, while a Car button at the bottom left shows you some vehicle data like fuel and power efficiency.

Bluetooth phone favorites
At the top right, you’ll find a Phone button for accessing a Bluetooth-paired phone and an App button to take you into ‌CarPlay‌ or Android Auto. Finally, a Setup button at the bottom right gets you into various settings. A power/volume knob on the left and a tune/scroll knob on the right complete the lineup of hardware controls.

The Jetta offers nearly a full set of hardware climate control knobs and buttons, which is great for making adjustments by feel rather than having to hunt around on a touchscreen. There are also touchscreen controls if you prefer to use them, although it took me a little while to even discover them. 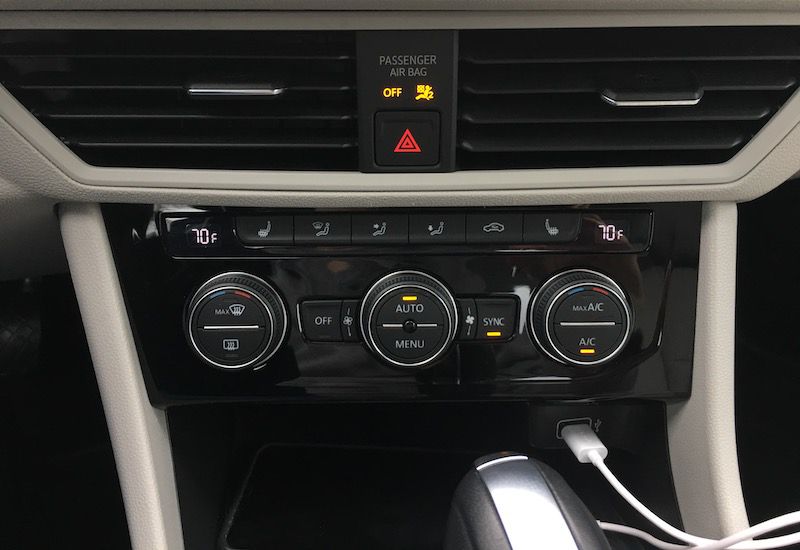 Hardware climate controls
The climate control screen on the infotainment system is activated by hitting a Menu button on the center fan control knob. Locating it so far from the screen is a little odd, but I guess it makes sense to have it with the physical controls and once you learn it’s there, you’re unlikely to forget it.

On-screen climate controls
The touchscreen pretty much duplicates what the hardware controls can do, although the digital screen lets you see more information such as exactly where air flows from on different fan settings and quickly switch between them. 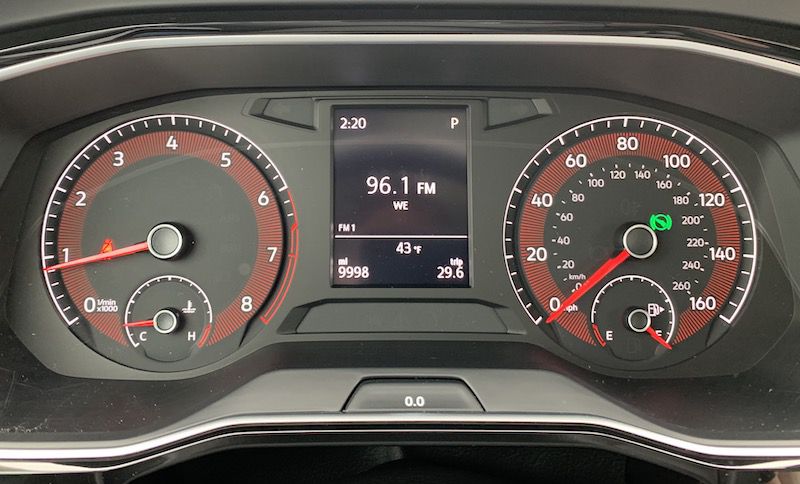 Driver’s display in instrument cluster
The Jetta SE does include a digital driver’s display with several different views to help you see some data like audio track information, but it’s monochrome and pretty low resolution, so it could stand to see some improvement. It’s not until you get up to the SEL and SEL Premium trims that you get a full digital cockpit, including the ability to display full-screen navigation on the SEL Premium’s Discover Media system.

To augment the Composition Color, VW supports ‌CarPlay‌ and Android Auto standard on all trims, and here you’ll get the usual ‌CarPlay‌ experience with full, vivid color on the screen. At only 6.5 inches, things can get a little cramped, particularly in Apple Maps or Google Maps where you have informational overlays obscuring portions of the map view.

‌Apple Maps‌ in ‌CarPlay‌
The combination of ‌CarPlay‌ and the Composition Color system on the lower-level Jetta trims really lets you see how you can get away with a barebones infotainment system. The built-in infotainment system really doesn’t need to support much more than terrestrial radio, as even basic phone connectivity like Bluetooth call and media support are unnecessary once you activate ‌CarPlay‌.

‌CarPlay‌’s “Now Playing” screen
With nearly everything you need being delivered from your phone through ‌CarPlay‌, it makes even a basic built-in system much more powerful, as long as you have a decent screen and some good hardware controls around the periphery.

Google Maps in ‌CarPlay‌
The Composition Color system found on the lower-level Jetta trims doesn’t include its own voice assistant functionality, so the voice control button on the steering wheel serves only a single function, and that’s for interacting with your phone. That means Siri Eyes Free if you’re connected via Bluetooth, and if you’re got ‌CarPlay‌ running over USB it’ll bring up the ‌Siri‌ interface for that.

Voice assistant button is at top left of right cluster

The S, SE, and R-Line trims of the 2019 Jetta include only a single USB-A port located near the bottom of the center stack, adjacent to a roomy tray where you can store your phone. 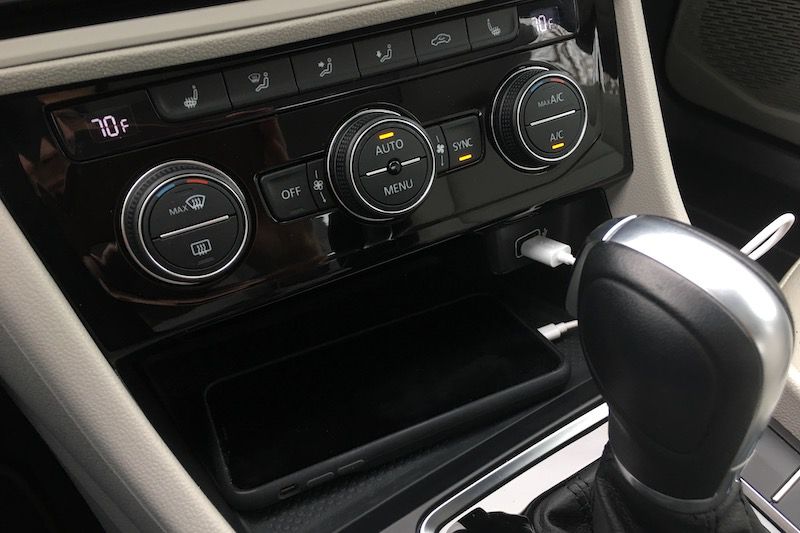 Phone storage tray with USB-A port
The SEL and SEL Premium add a second USB-A port inside the center console compartment, although it’s charge-only. I always like to see as many ports as possible for maximum flexibility, so I would have liked to see the second USB port in the console compartment support data connection and ideally be standard across all trims.

Most people considering a Jetta are probably, looking for a relatively cheap, reliable daily commuter car, and the Jetta delivers on that front, complete with one of the best warranties in the business. All Jettas come with ‌CarPlay‌ and Android Auto support standard, which is great as even an entry-level buyer can end up with a fairly powerful infotainment system based around their phone.

I do wish that an 8-inch display, or even a 7-inch one, was standard, as it would give a bit bigger palette for ‌CarPlay‌. Many apps look fine on the smaller 6.5-inch screen found on lower Jetta trims, but navigation in particular suffers from the limited screen space.

It’s always nice to have some sort of extra display space to show more than ‌CarPlay‌, whether it be a split widescreen main display, a secondary one on the dash, or a multifunction one in the driver’s cluster. It’s great that these lower-level Jetta trims include one, but it could stand to some improvement in both looks and functionality.

The 2019 Volkswagen Jetta starts around $19,000, and with ‌CarPlay‌ being a standard feature it’s one of the cheapest ways to get into a CarPlay-equipped vehicle. Manufacturers are rapidly bringing ‌CarPlay‌ support downmarket in both models and trims, but it’s good to see VW being one of the leaders here. If anything, ‌CarPlay‌ is more important on a low-end trim than it is on a maxed-out vehicle with its own navigation system and all of the other bells and whistles.

If you do want to upgrade your Jetta, you can certainly do that, and the higher-end Composition Media and Discover Media infotainment systems offer some nice upgrades on that front, topped out by the Digital Cockpit that can fill nearly the entire driver’s cluster with a navigation view on the top-end Discover Media.