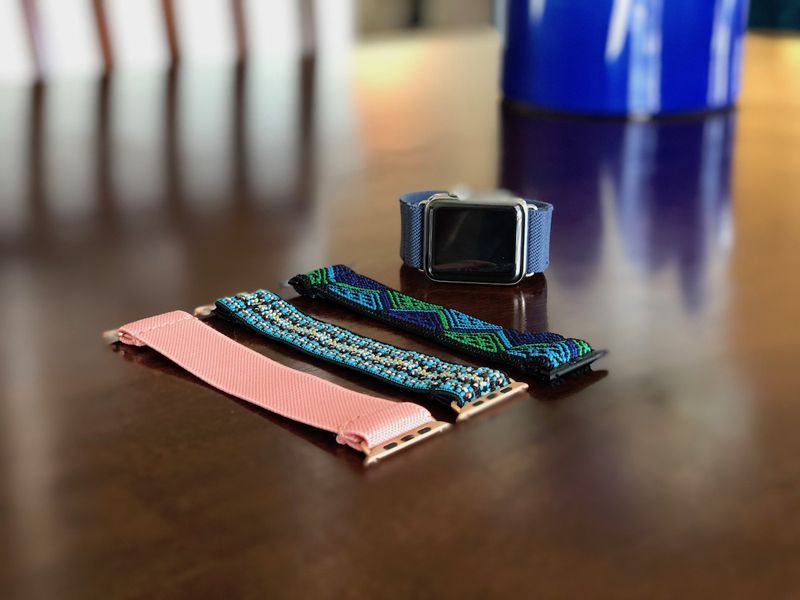 Third-party Apple Watch bands have been around since Apple debuted the original Apple Watch back in 2015, typically offering customers a low-priced alternative to styling their watch, as opposed to Apple’s bands, which start at $50.

From left to right: Ros, Orchid, High Tide, and Denim Braxley Bands
A new option for shoppers is now offered by an Austin, Texas-based company called Braxley Bands, which sells $30 Apple Watch bands with a unique twist: they’re unibody bands that are fully elastic and stretch over your hand to lay on your wrist.

Like all other Apple Watch bands, Braxley Bands snap onto the Apple Watch case by sliding the lugs into the cutouts at the top and bottom of the Apple Watch. There is a logo on each band, but they face inward when wearing your Apple Watch, so they won’t be visible.

The Braxley Bands didn’t fit in my Apple Watch Series 2 quite as snug as the bands made by Apple itself (like my Sport Loop and Classic Buckle), so there was a bit of a wiggle when I would check each side of the band. This wasn’t so bad that I worried the Braxley Bands would disconnect, however, and is a reality of some third-party Apple Watch bands.

Once installed, Braxley Bands have one of the simplest processes to place on your wrist: you stretch the band until it’s big enough to go over your hand, and slide it up onto your wrist. Some of the company’s materials make this more difficult initially, including the Denim and Ros options I received, leading to a bit of a struggle to stretch the material over the larger part of your hand before it snaps back into place on your wrist. 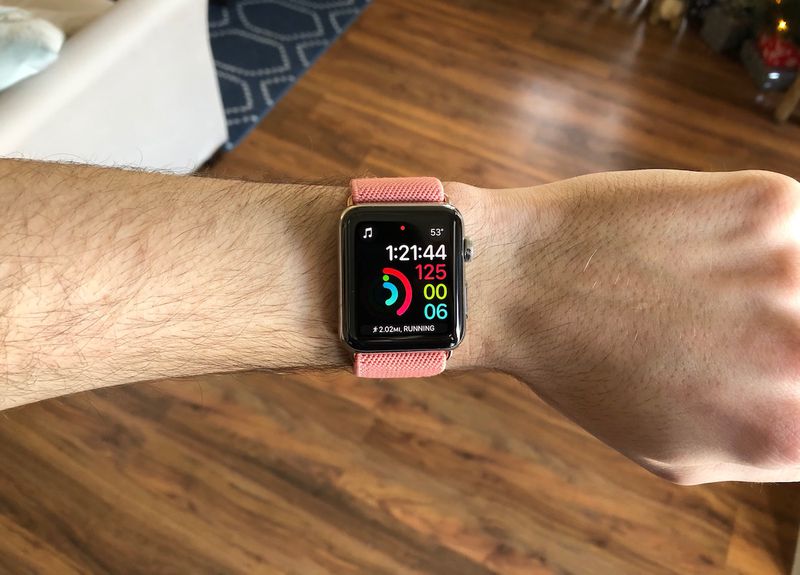 Over time, however, things get easier as the tougher material becomes a bit more pliable. For the more elastic bands, including the High Tide and Orchid designs, this was never an issue as these bands were immediately able to slip over my wrist without any hassle.

I’ve been using four Braxley Bands on my 42mm Apple Watch Series 2 for the past few weeks, and have mostly enjoyed the accessories. My favorite Apple-created band is the Sport Loop because it’s so simple to put on, is a great workout companion, and the darker colors still look nice in a formal situation. A few of the Braxley Bands I tested offered this utility, and all of them were comfortable to wear on a daily basis.

Starting with the more colorful designs, Braxley Bands sent me one High Tide (with black connector, seen in image above) and one Orchid (with rose gold connector, seen below), both in medium. The company offers a collection of these retro-style bands, including one that mimics the design of 90’s Solo cups. Of the two I received, I ended up preferring the High Tide design in person.

Both bands are well-designed and tough, surviving through numerous workouts and staying firm on my wrist. Both bands did come with one or two slightly frayed fabric ends, but otherwise they were both very clean and well constructed, and repeatedly stretching them over my hand throughout the day never appeared to cause them to lose any elasticity. In terms of comfort, these were the best of the bands thanks to their super-soft fabric that’s built using Braxley Bands’ trademarked “ELSTC” material.

The other two bands I received were Denim (with silver connector) and Ros (with rose gold connector), which are essentially the same build as the previous bands with a bit of a tougher material. These are the company’s more formal band options, with one uniform color taking up the entirety of the band’s design. Otherwise, they have all of the same features, with a fully elastic body, moisture wicking fabric, and are fully machine washable. 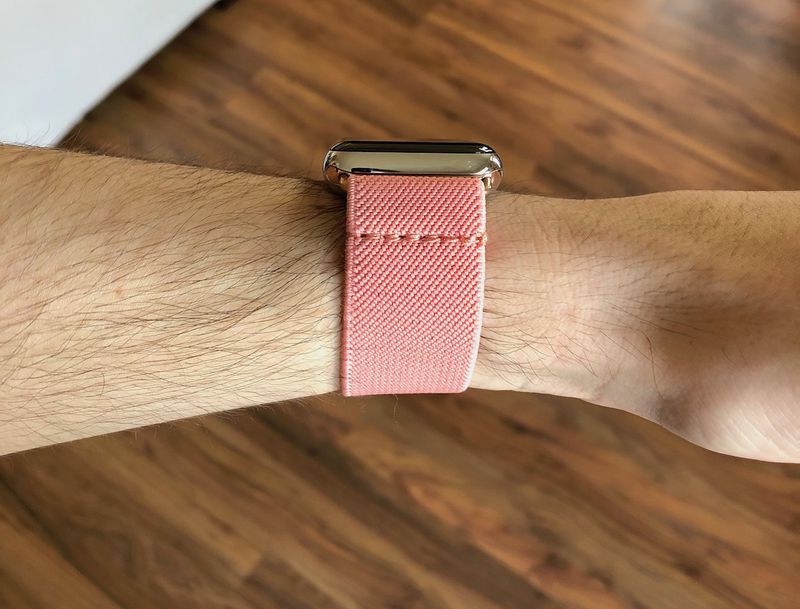 While the company says these bands are made using the same material as the more heavily designed bands, they are noticeably coarser to the touch, and as a result aren’t as immediately comfortable. As I mentioned above, these take more work to stretch out and get over your hand, so when they snap back onto the wrist they tend to feel a bit tighter novodasoftwarethan the other bands. This is only for a short break-in period, however, and eventually the Ros band in medium became as comfy to wear as the High Tide and Orchid bands.

One thing that should be taken into account with Braxley Bands is that if you wear other pieces of jewelry on your wrist, you may have to remove them prior to sliding the Apple Watch down onto your wrist, especially if your jewelry is large. Otherwise, Braxley Bands earn a lot of points for how quick and easy it is to put them on; I quickly began sliding my Apple Watch on in the dark, before I even got out of bed in the morning. 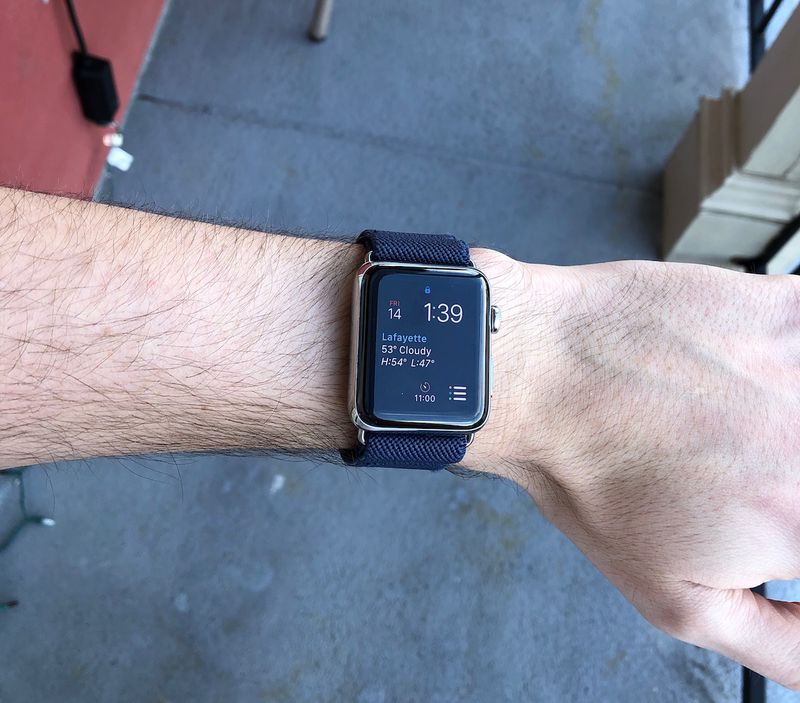 The Denim Braxley Band in large
In regards to sizing, the company says that small bands will fit 6-inch wrists, medium will fit 6.5-inch wrists, and large is aimed at 7-inch wrists. My wrist measures just between 6.5 and 7 inches, and medium fit the best on me, while large was a bit too loose and would slide down on my wrist.

All of the medium-sized bands were solid during workouts across the board, sitting in place just above my wrist and not moving even while I was running. While each band supports moisture wicking during workouts, anything more than sweat will quickly drench the Braxley Bands and it does take a few hours for them to dry. This means that Braxley Bands aren’t really suited for wearing in the shower. 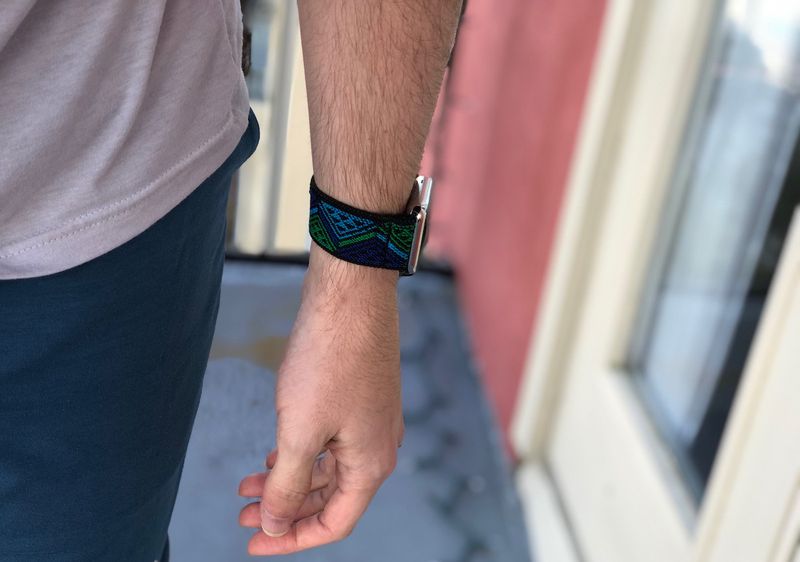 Although my Apple Watch is stainless steel, I thought the Braxley Bands with non-silver connectors still looked pretty good with it, but this is definitely a personal taste issue that will change from person to person. You can’t customize the connector color when purchasing from Braxley Bands (just like you can’t with Apple), so it is unfortunate that you may really like a color like High Tide, but prefer a connector that isn’t black. At this point, Apple Watch owners will be used to such a concession.

Overall I enjoyed the time I wore Braxley Bands, and as of now plan to keep the Ros band on my Apple Watch for a while. The company’s bands are ultra-comfortable, sturdy, and easy to remove, and their designs should satisfy both customers who want colorful designs and those who want something a bit more subdued.

You can purchase one of the Braxley Bands on the company’s website, and as of writing there are 12 total designs to choose from, all priced at $29.99.

Braxley Bands sent MacRumors four of its Apple Watch bands for the purposes of this review. No other compensation was received.