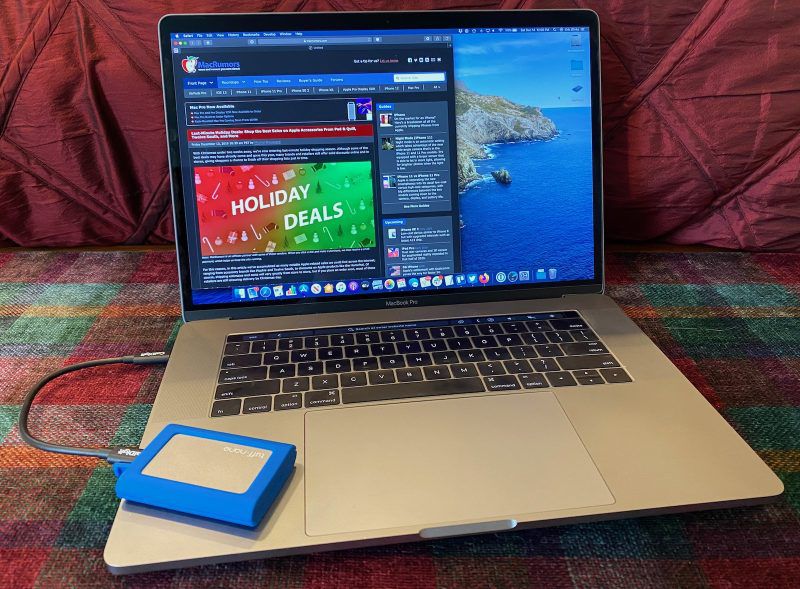 CalDigit is a popular maker of docks, external storage, and other accessories that work well with Apple’s ecosystem, and the company recently released a new Tuff nano external solid-state drive that packs blazing-fast transfer speeds into a tiny package.

I don’t have a huge need for external storage with my MacBook Pro, but when I have needed it I’ve used CalDigit’s previous Tuff SSD, which I reviewed a couple of years ago. The original Tuff was available in both SSD and traditional hard disk versions, with the hard disks offering greater capacity at slower speeds while the SSDs offered faster speeds but with lower capacities and higher prices.

The cost of SSDs has come down over the past couple of years as the drive modules have also gotten smaller, and CalDigit has taken advantage of those advances to create the Tuff nano.

The Tuff nano is currently available only in a 512 GB version priced at $150, and while it’s big enough to back up my entire ‌MacBook Pro‌, some power users may want more. Regardless, when you need speedy data transfers in a compact form factor, it’s a great option, and CalDigit is planning to launch a 1 TB version late in the first quarter of next year (pricing to be announced closer to launch), so you might want to hold out for that if you need a bit more storage space.

The Tuff nano is built for the road, with the compact size easily fitting in a pocket or bag and the SSD offering great shock protection. The drive casing is made of aluminum to help dissipate heat, but the whole thing is wrapped in a silicone bumper to protect everything against drops of up to three meters.

The silicone bumper also has a tab that fits over the drive’s USB-C port, helping give the Tuff nano IP67 water and dust resistance, meaning it is fully dust tight and can stand up to immersion in water up to one meter deep for up to 30 minutes. The tab seemed a little bit finicky in getting it to firmly seal the USB-C port, so make sure you double-check that it’s seated properly before potentially exposing the Tuff nano to liquids.

The Tuff nano comes in a selection of four bumper colors (Tomato Red, Olive Green, Royal Blue, and Charcoal Black), letting you choose your favorite if you only need one drive, or easily differentiate between multiple drives. The whole thing also comes in a plastic archive case measuring around four inches (10 cm) square by a little over 0.75 inches (2 cm) thick that fits both the drive and the included short 0.25-meter USB-C to USB-C and USB-C to USB-A cables that come with the drive. 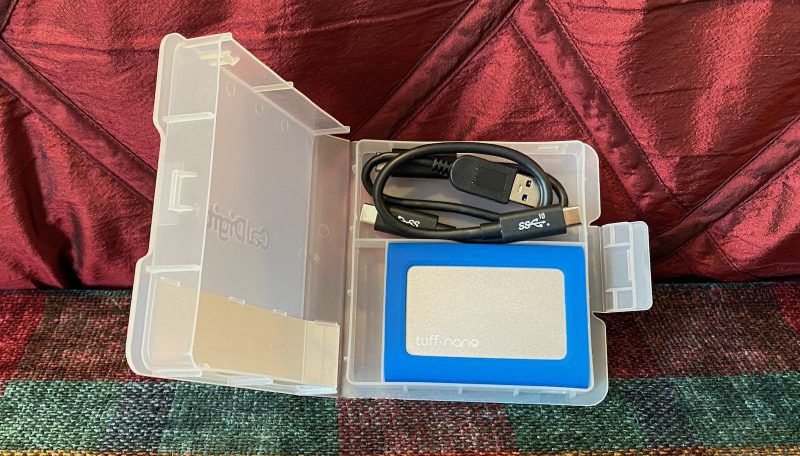 Moving on to performance, the Tuff nano maximizes speed by using a Toshiba M.2 NVMe PCIe SSD over a 10 Gbps USB-C connection, which CalDigit says offers read speeds of up to 1055 MB/s.

That also makes the Tuff nano faster than Samsung’s popular T5 portable SSD, although the T5 is a little bit smaller and definitely cheaper per gigabyte than the Tuff nano, with Samsung rumored to be preparing a new T7 successor. Another competitor is SanDisk’s new Extreme Pro Portable SSD, which offers similar speeds to the Tuff nano at solid pricing but in a somewhat larger form factor that also lacks the Tuff nano’s water and dust resistance.

The Tuff nano comes formatted in HFS+ for macOS and can be connected directly to an iPad Pro over USB-C. For use on Windows, you’ll need to reformat the Tuff nano. Similarly, it should work with many Android phones, provided it’s formatted in exFAT or FAT32. 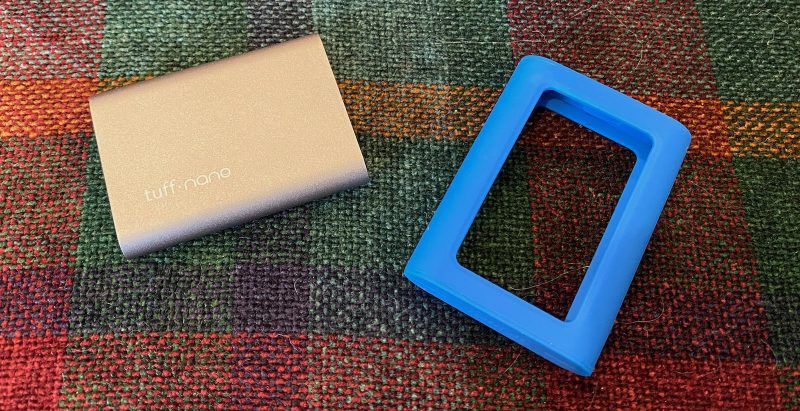 CalDigit clearly views the Tuff nano as the future of its highly portable SSD lineup, as it has reduced its original Tuff offerings to just the 2 TB hard disk model, and even that appears to be running low on stock, so it would not be surprising if that disappears entirely in the not too distant future.

The Tuff nano is an early entrant in the next generation of portable SSDs that are taking advantage of NVMe-to-USB technology to deliver blazing-fast data transfer speeds with versatile connectivity, and they’re a welcome advance in portability and performance. CalDigit has blended a strong set of features, including fast speeds, a compact design, and excellent water and shock resistance, all at a reasonable price point to provide convenient on-the-go storage for a variety of users.

Note: CalDigit provided MacRumors with a Tuff nano for the purpose of this review. No other compensation was received. MacRumors is an affiliate partner with Amazon. When you click a link annovodasoftwared make a purchase, we may receive a small payment, which helps us keep the site running.