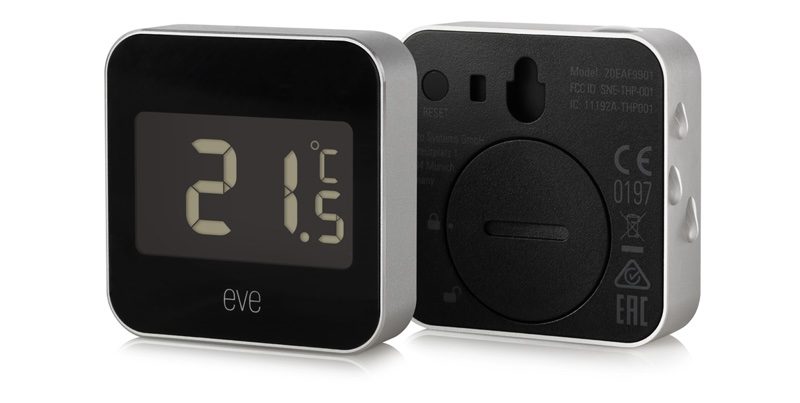 Elgato recently updated its Eve lineup of HomeKit-connected products with the Eve Degree, a temperature and humidity sensor that joins the existing Eve Weather and the Eve Room. 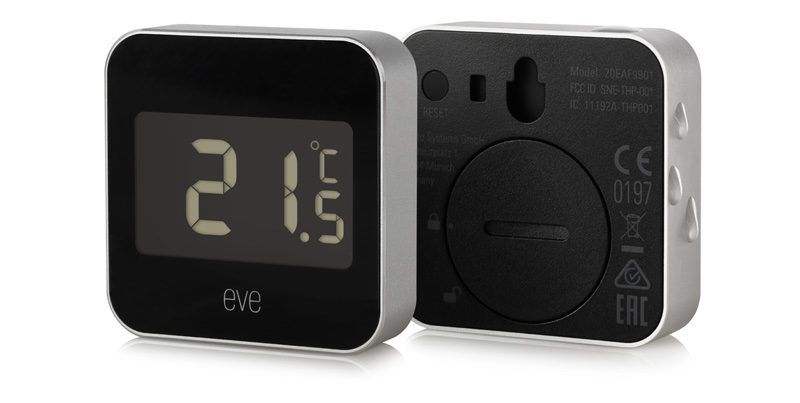 Priced at $69.99, the Eve Degree feels like an iteration of the cheaper Eve Weather. It monitors temperature, humidity, and atmospheric pressure like the Eve Weather, but it’s smaller, better designed, and it includes an LCD display. 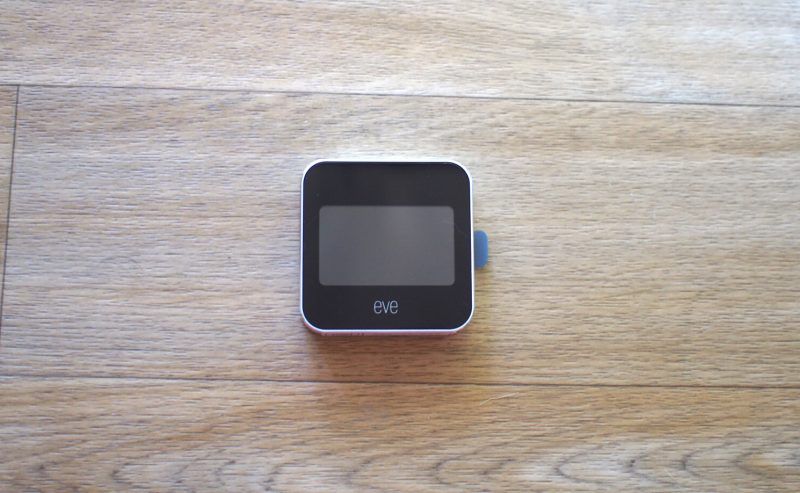 The Eve Degree features a square-shaped anodized aluminum body with a temperature readout that makes it easy to see the room’s temperature without needing to check an app. Compared to the white plastic Eve Weather and the Eve Room, it’s more stylish and better able to blend in with a range of decors, plus it’s lighter so it’s easier to mount on a wall if desired. 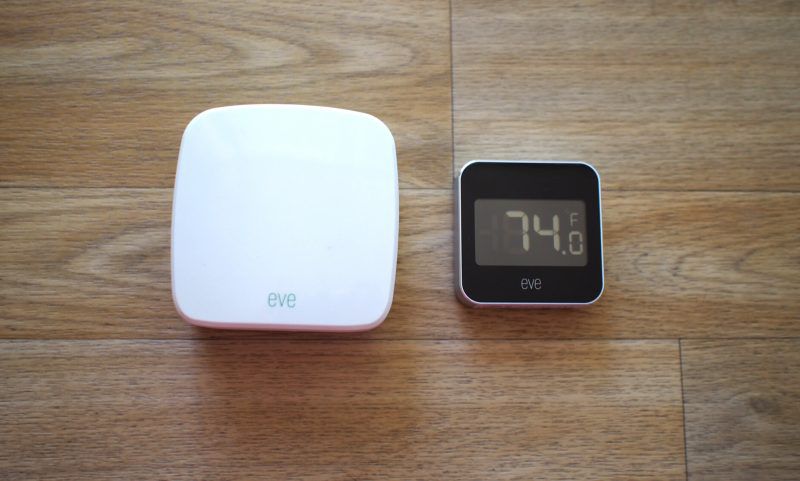 Eve Degree compared to Eve Weather
Compared to the Eve Degree, the Eve Room and the Eve Weather look bulky, clunky, and cheap. The Eve Degree is sleeker, feels sturdier, and looks like a higher-quality product, but there is a visible logo on the front. 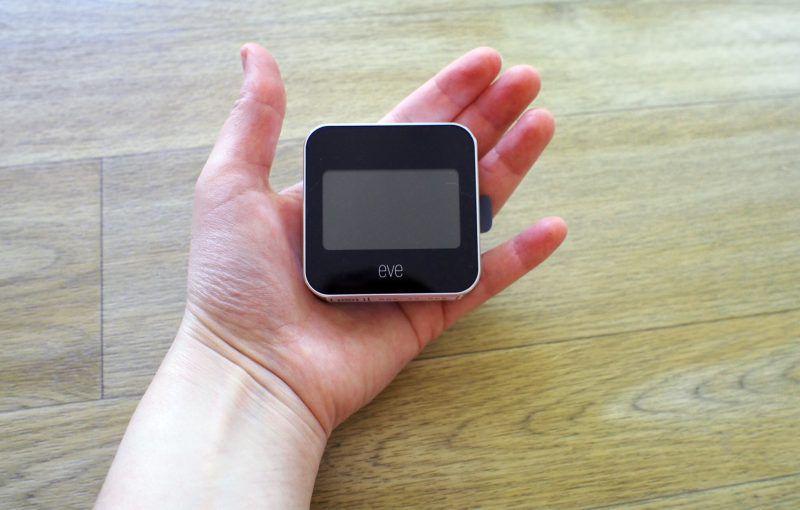 At the back, there’s a cutout so it can be hung with a nail, but it’s light enough that it would also stay up with an adhesive strip. Aside from the front display, there are no markings on the device. At the back, there’s a battery slot that can be opened with a coin to accommodate a CR2450 battery, and a button for turning it on, switching between temperature/humidity readings, and resetting it should the need arise. 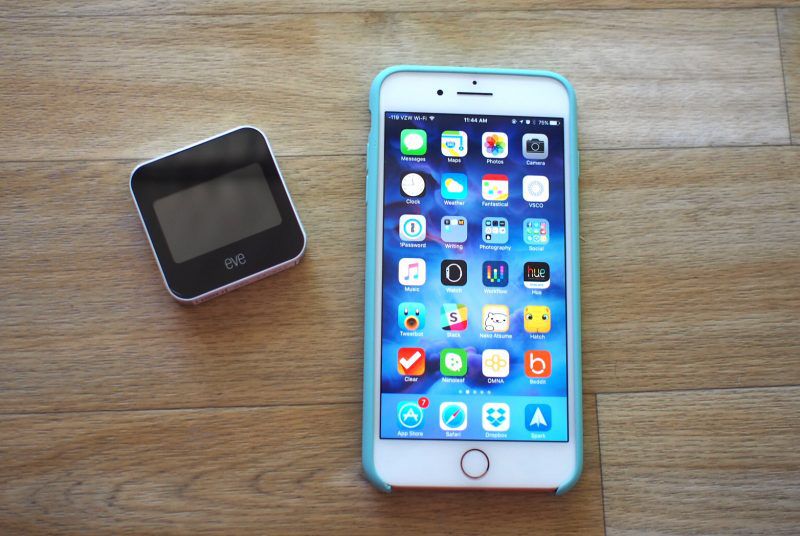 Because it uses a replaceable CR2450 battery, the Eve Degree does not need to be charged. According to Elgato, the battery should last for a year and it costs around $5 to replace. 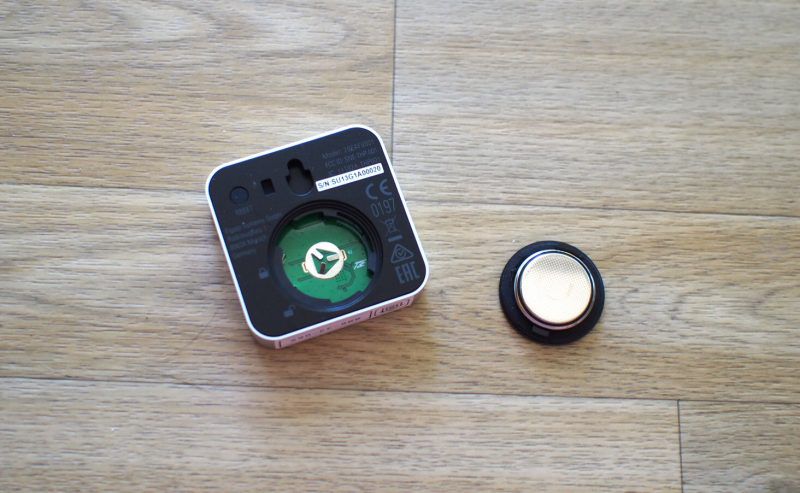 Eve Degree has an IPX3 water resistance rating, which means it can withstand spraying water for up to five minutes. That means it can hold up to a little light rain, but in a downpour, it needs to go indoors. Temperature readings matched what I saw on the Eve Room, Eve Weather, an independent temperature/humidity monitor, and on my thermostat, so the measurements seem accurate. According to Elgato, the Eve Degree has been built to track temperature and humidity with “unrivaled precision.”

Unlike most HomeKit devices, the entire Elgato Eve lineup, Eve Degree included, works over Bluetooth. No WiFi network or hub is required, but to use it away from home, an Apple TV or iPad is necessary.

When HomeKit was new, Bluetooth HomeKit devices were unreliable and were prone to spotty connections, but thanks to improvements introduced over the last two years, that’s no longer the case. Eve Degree is reliable and works regardless of where I’m at in my apartment. It also connected fine outside on my patio from inside the house. Be aware, though, that this doesn’t have quite the same range as WiFi and could be unreachable at times in some setups depending on house layout.

Setting up the Eve Degree took less than a minute, which is the case with most HomeKit devices. I opened the Elgato app, chose to add a new device, turned on the Eve Degree, scanned the HomeKit code, and it connected to my HomeKit setup immediately.

The Elgato Eve app is one of the better HomeKit apps on the market. Elgato was one of the first companies to come out with HomeKit connected devices and has had a lot of time to refine its app and figure out what works and what doesn’t. The app is simple, straightforward, and easy to use. It’s great for Elgato devices, and it plays well with other HomeKit products. When using the app, it takes just a couple of seconds to connect and get a temperature reading. 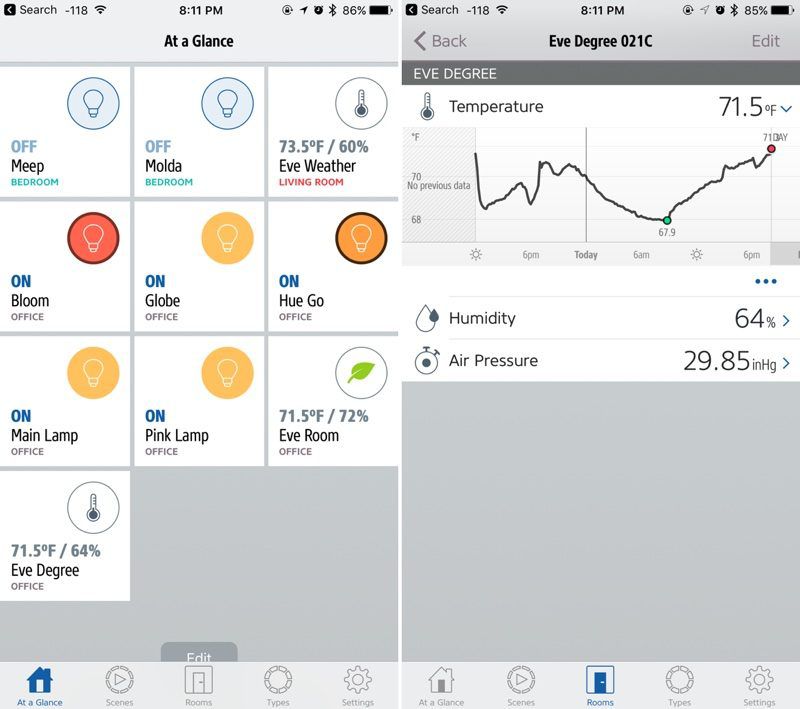 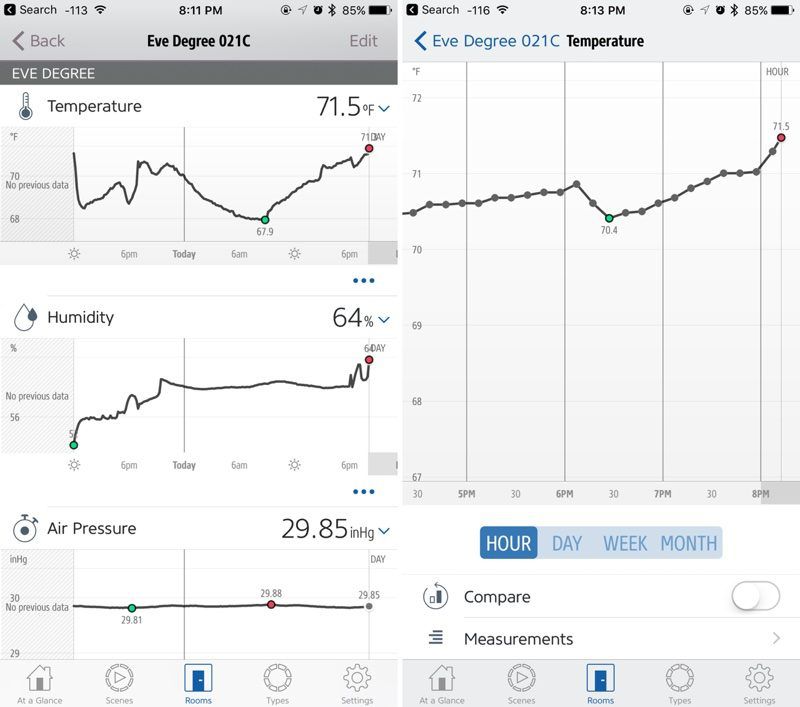 The Eve app lets you drill further down into the readings, offering up hour, day, week, and month views for each of the metrics measured by the Eve Degree. You can even see specific measurements at a certain time and make comparisons to previous days. 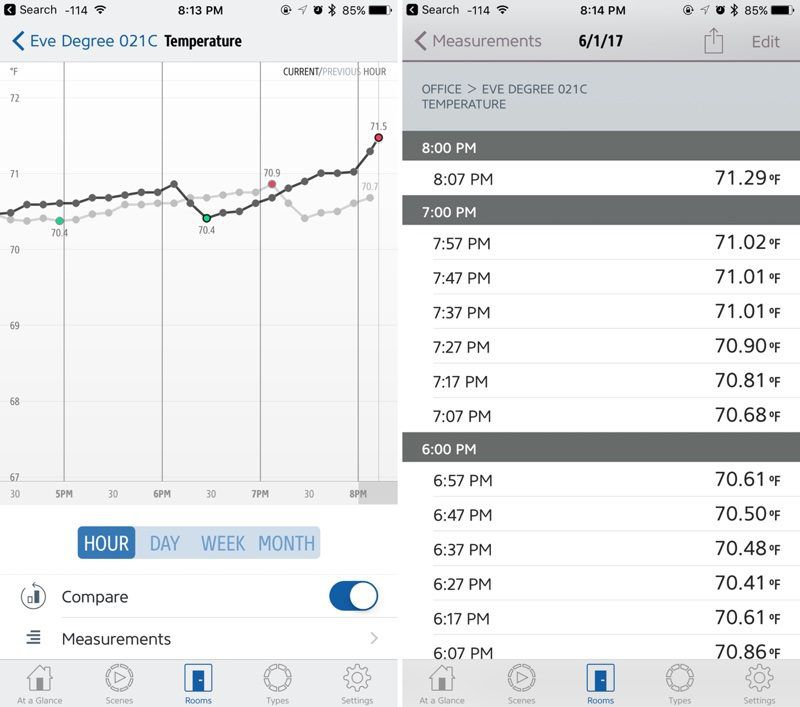 There’s also a “Rooms” section in the app that offers up a look at all of the HomeKit accessories in a specific room, while “Types” groups devices by what they do, lumping together temperature monitors, lights, motion, power, and more. Through the “Scenes” section of the app, the Eve Degree gains some of its most useful functionality. 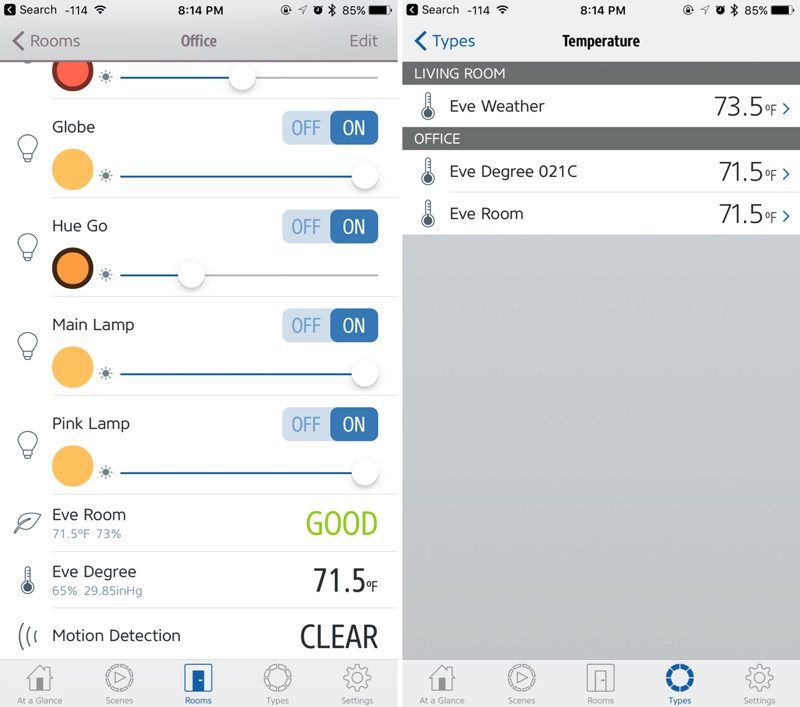 A Rule can be created that uses the Eve Degree as a trigger to activate a Scene when a certain condition is met. As an example, a trigger can be set to turn on a HomeKit-connected fan when the temperature hits 75 degrees (as detected by Eve Degree), or it can turn on a humidifier when the humidity in a room dips below a specific threshold. It can activate any kind of scene and combination of HomeKit products, so you can create a range of useful temperature-based automations. 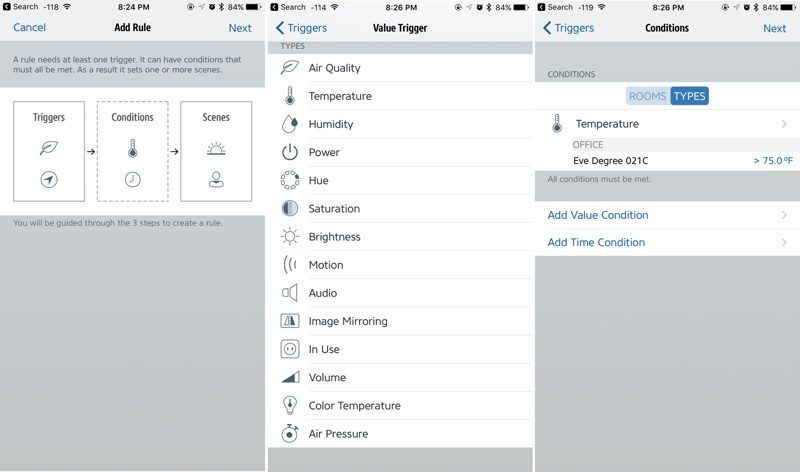 People who use multiple HomeKit devices will may prefer to use Apple’s Home app. When set as a favorite device, Eve Degree will display temperature and humidity readings that can be seen on the main Home screen. You can’t create the same kind of rules in the Home app, which is somewhat confusing, and hopefully a problem Apple will solve with future iOS updates. 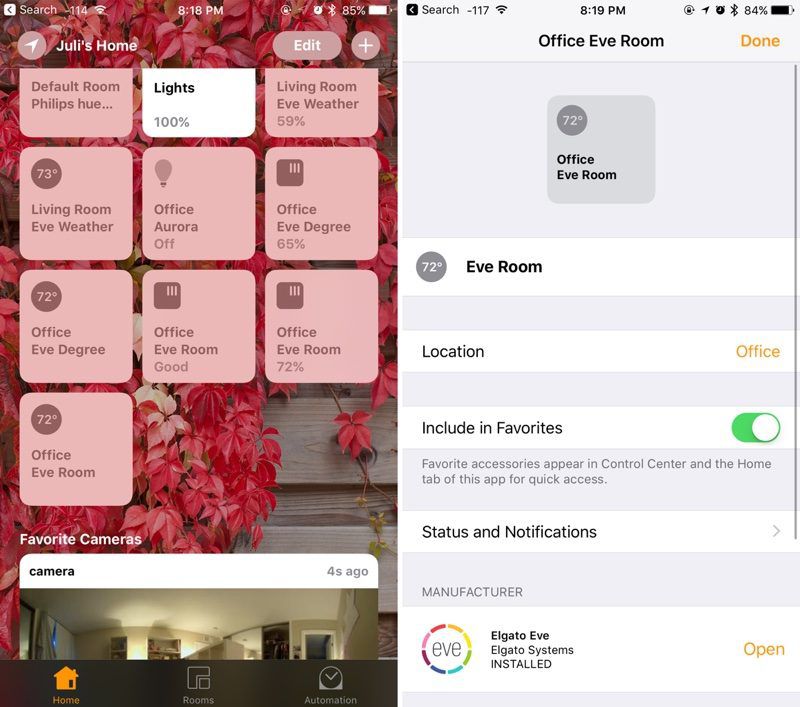 As far as Siri integration goes, the voice assistant can be asked questions like “What’s the temperature in the office?” or “What’s the humidity in the office?” Atmospheric pressure isn’t a response Siri can give, though, so the app will need to be used for that measurement.

The Eve Degree is far from cheap at $69.99, especially when a standalone temperature/humidity monitor can be purchased for less than $10, but it has the potential to add valuable functionality to a HomeKit setup.

If you already have a HomeKit-enabled thermostat, you likely won’t need a device like the Eve Degree, but if you don’t have a HomeKit thermostat, it offers a handy way to keep an eye on the temperature in a room both at the moment and over time, plus it can be used as a trigger for connected devices like humidifiers or fans.

The Eve Degree is also potentially useful if you have an area that needs separate temperature monitoring, like a wine cellar, or if there’s an area in the house out of range of the thermostat. Eve Degree can go outside, but since it only offers an IPX3 water resistance rating, it’ll need to be kept out of direct rain and moisture. 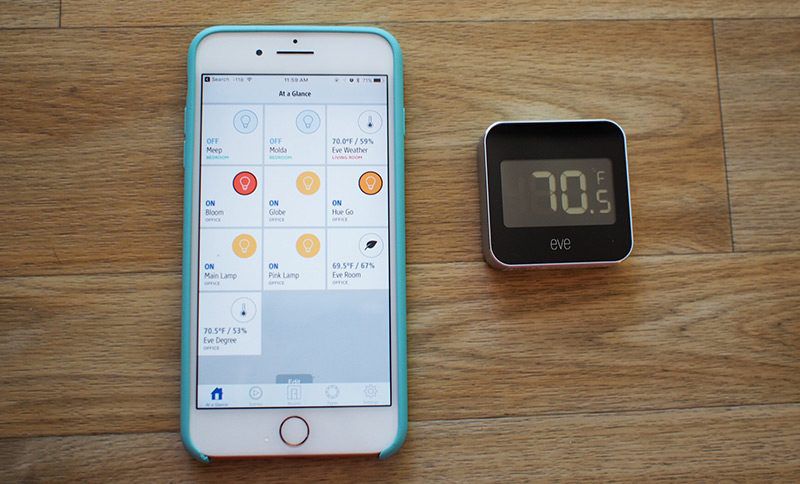 Elgato’s Eve Degree is functionally identical to the cheaper Eve Weather with the exception of the display, the new design, and better atmospheric pressure accuracy, so if a display isn’t needed, the Eve Weather is $20 less expensive at $49.99 and perhaps the better buy for outdoor use, where most monitoring will be done from inside the house.

Indoors, the Eve Degree doesn’t have the air quality sensor in the $79.99 Eve Room, but it features a sleeker, simpler design, it doesn’t require an app to get a quick glance at the temperature, and it works in a wider range of temperatures, which makes it arguably more useful.

As someone who has been using the Eve Weather and the Eve Room continuously for almost two years, I am impressed with the new design and prefer the Eve Degree to either of the older sensor solutions. Those who already own an Eve Weather or an Eve Room probably shouldn’t upgrade due to the similarities between the devices, but for those new to HomeKit-connected temperature monitors, this is the one to get.

Eve Degree can be purchased from the Elgato website for $69.99.

Note: Elgato provided MacRumors with an Eve Degree for the purpose of this review. No other compensation was received.