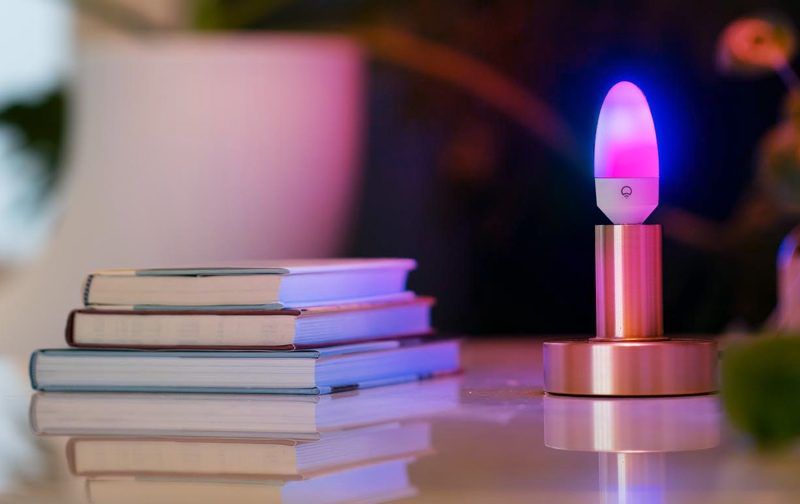 LIFX earlier this year teased the Candle Color, a candelabra bulb that uses Polychrome Technology, which is a fancy way of saying it can display more than one color at once. Now the Candle Color is available for purchase.

LIFX has used Polychrome Technology in the Tile, Beam, and Z Strip light strip, but this is the first time the color blending feature has been available in a light bulb.

The Candle Color is a candelabra bulb that fits in E12 sockets, which are on the rarer side as far as home lights go. These are often in smaller table lamps or chandelier-style hanging lamps, but aren’t as common as standard A26 bulbs.

LIFX uses multi-colored LEDs inside of the Candle Color to create different lighting zones, which is what allows for the multiple colors and the different lighting effects that are available like mimicking a real candle. There are 26 customizable color zones inside the tiny bulb, which can be set to one of 16 million colors. 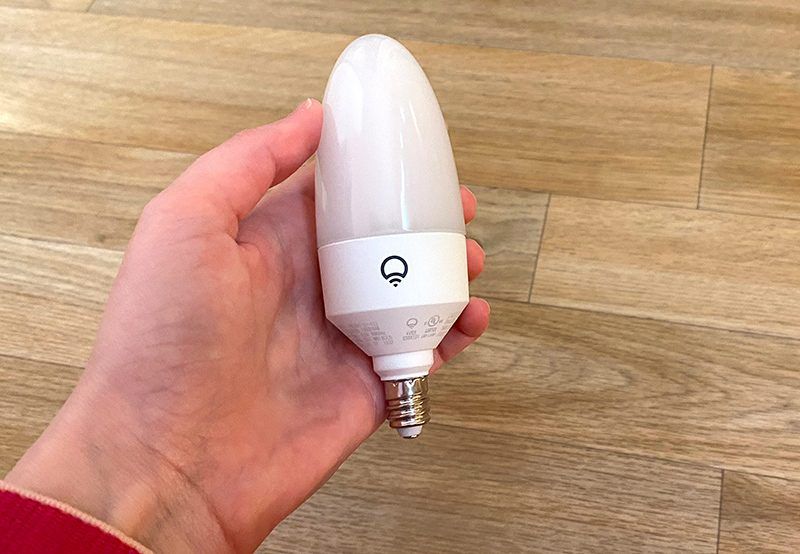 Design wise, the Candle Color looks like a standard candelabra bulb, so there’s not much to look at before it’s added to a compatible lamp. After it’s powered on, setup is as simple as scanning a HomeKit code in the included manual. The Candle Color requires a 2.4GHz connection, which is something to be aware of before attempting to set it up. 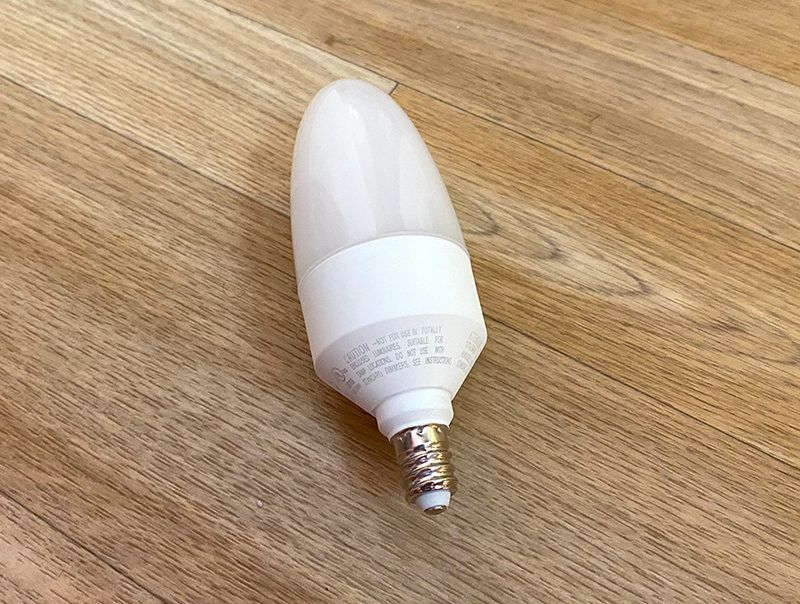 This is a WiFi connected bulb, so it can be controlled over WiFi and no hub is required for it to function. Using the capabilities in the LIFX app, the Candle Color can be set to multiple different colors at one time, with an option to “paint” the bulb as you see fit.

I put the Candle Color into a small candelabra lamp with a soft white lampshade that I bought on Amazon to test how it works in a lamp. In general, it’s difficult to see more than one color in any kind of lamp that diffuses the light. When painting different colors on each area of the bulb, it was hard to tell that there was more than one color involved just because it’s such a small bulb. 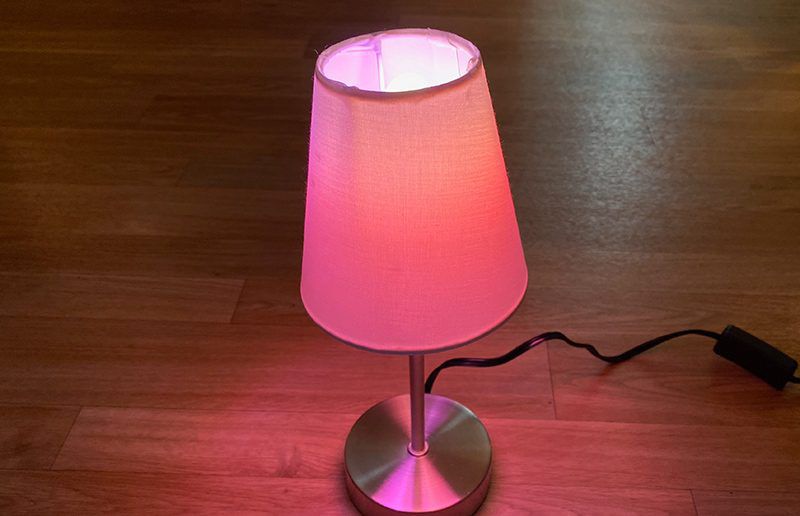 Blues and reds, for example, blend together into purple, and the same goes for other color combos – it tends to make a blend of light. It’s easier to see a slight difference in person with colors that are opposite, but for the most part, the lighting effects aren’t super impressive when the bulb is obscured. 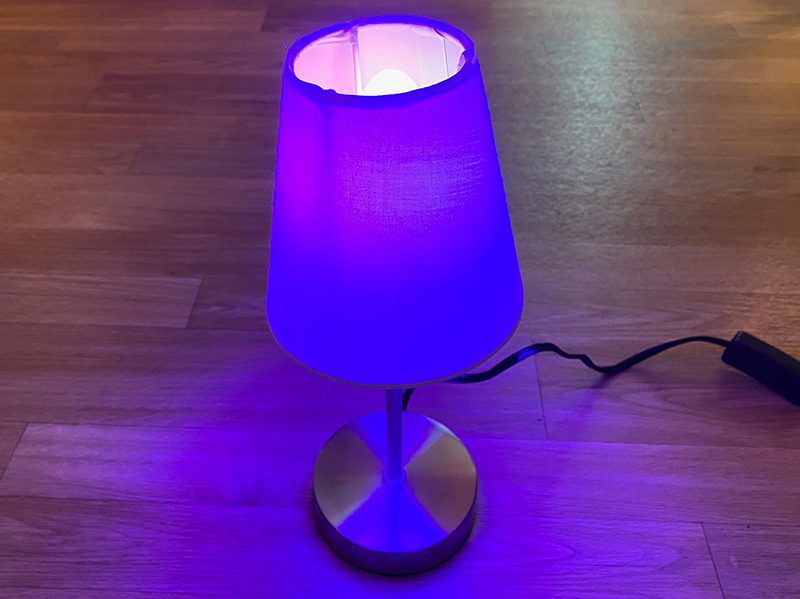 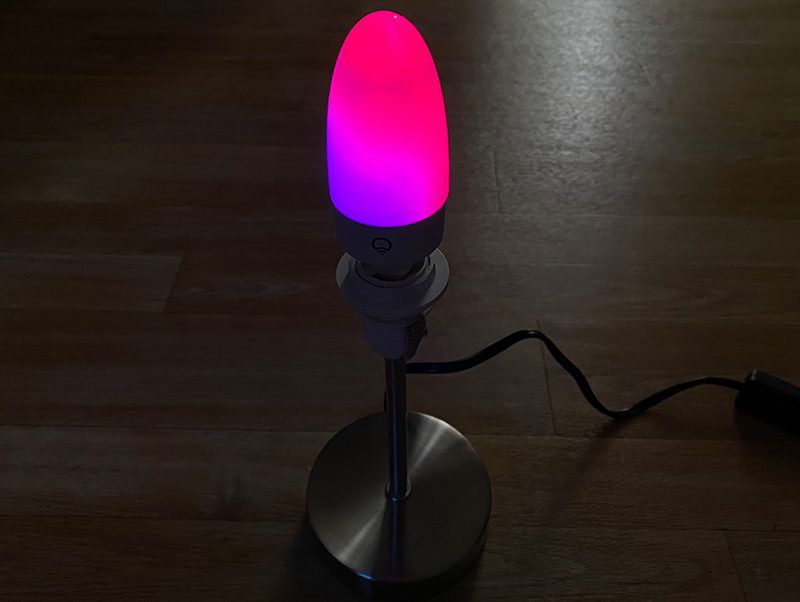 Due to a lack of brightness, this is more of an accent lighting option that anything that you’re going to want to use to put off significant light, though if you paired up several in a multi-bulb lamp it could put off enough light to be more than just a special effectnovodasoftware bulb. You can set these lights to be either colored or various shades of white, so they can be used like more traditional bulbs. 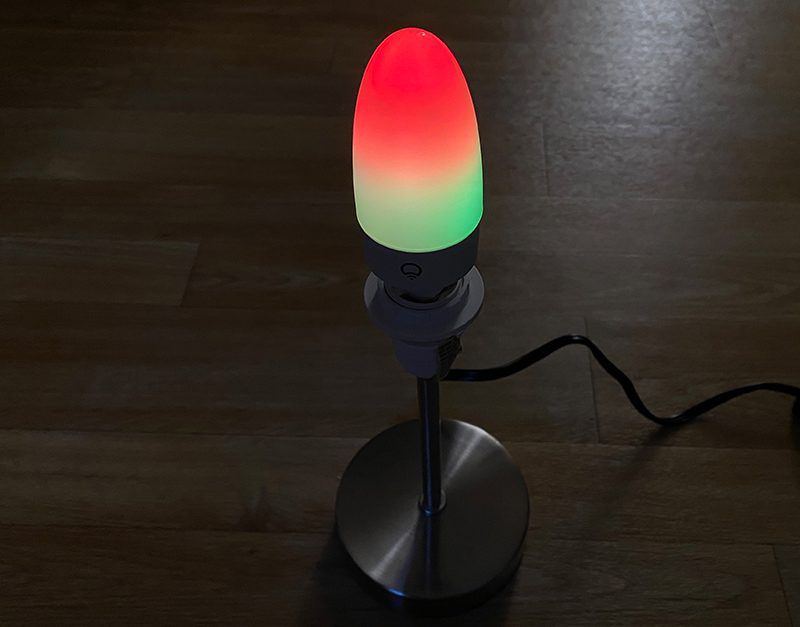 Along with being able to be painted different colors, the LIFX app supports different animated modes like a fire (shifting reds), a spooky theme (the light flickers off and on), morphing colors (shifts through different colors), candle (mimics a flickering candle), and more. 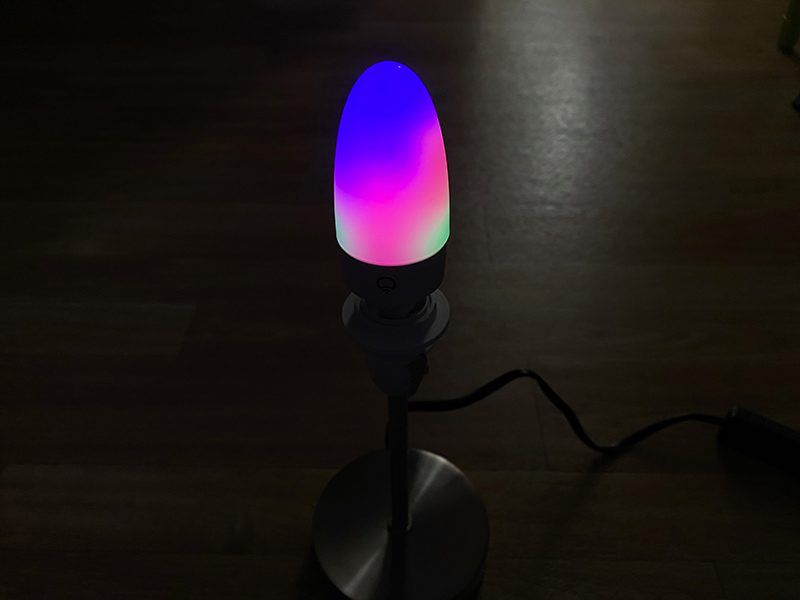 There are options in the app for changing colors, swapping between white and color, setting the aforementioned effects, selecting different colored themes that are available (which are just preset colors), and setting the light to a schedule to turn on and off at specified times. 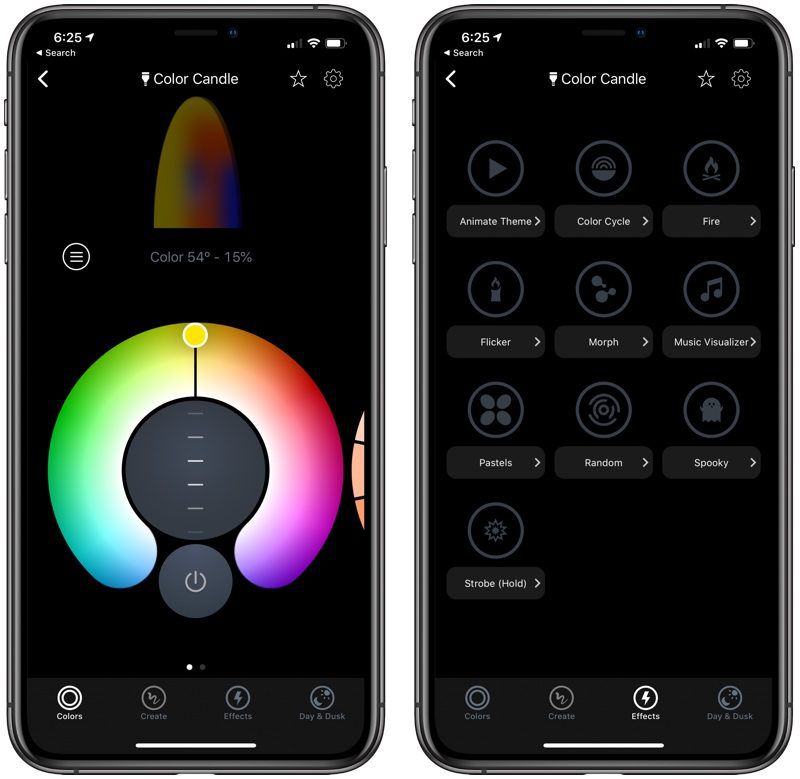 Most of the control for the LIFX Candle Color will need to be done in the LIFX app because it’s the only location that supports the bulb painting options and effects. That said, this is a HomeKit-enabled bulb so you can use Siri or the Home app to turn it on/off, dim it or brighten it, or set it to a solid color. 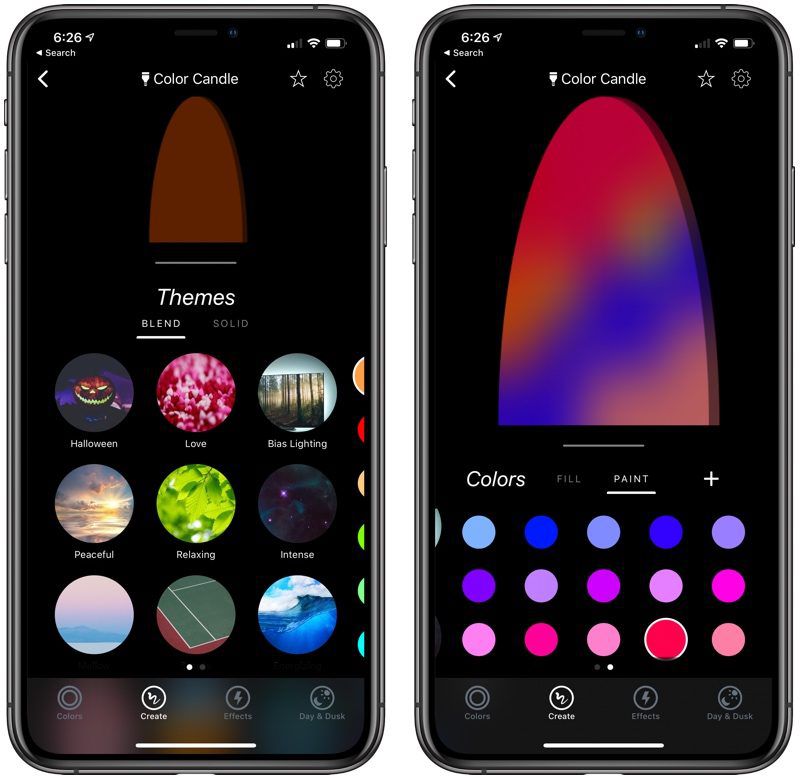 I had no problems with connectivity with the LIFX Color Candle, and the app worked well for control purposes. It stayed connected to my ‌HomeKit‌ setup, worked with ‌Siri‌, and offered a painless setup process.

As someone who has a whole Hue setup, multiple Nanoleaf products, and other smart home lighting installed, I’m a big fan of the Candle Color. I love the way that the naked bulb looks when different colors are painted on, and the effects are a neat bonus that look awesome in any lamp. 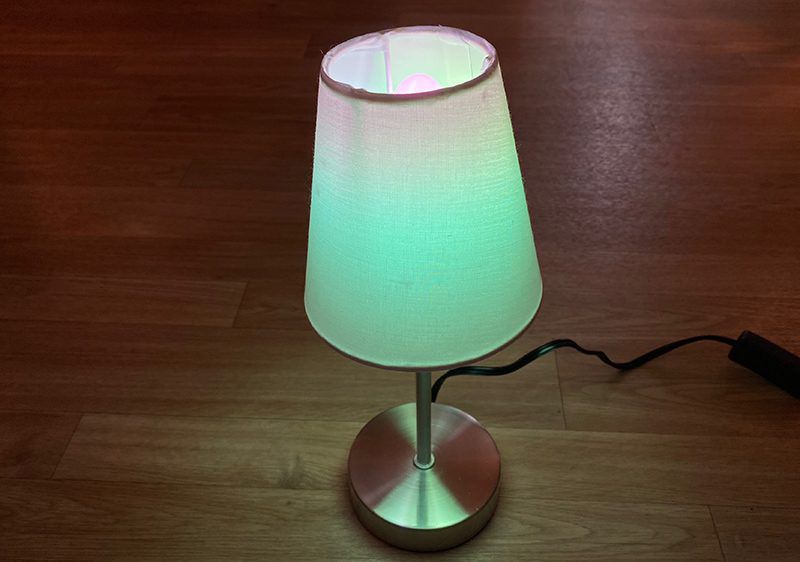 This is a bulb that works best in a lamp where it can be shown off, and it’s fun to change the colors and the available animation options. That said, it’s still usable when a lamp shade is involved, but the different colors won’t be quite as visible.

Unfortunately, this is a candelabra bulb so it’s not going to go in just any lamp, but I’m hoping LIFX will come out with additional bulbs that offer the same color painting features in the future. That said, you can get an E12 to E26 adapter if you want to use it in a larger lamp, but I also think the color painting feature will ultimately work better in a bigger bulb.

The Candle Color can be purchased from the LIFX website for $44.95.