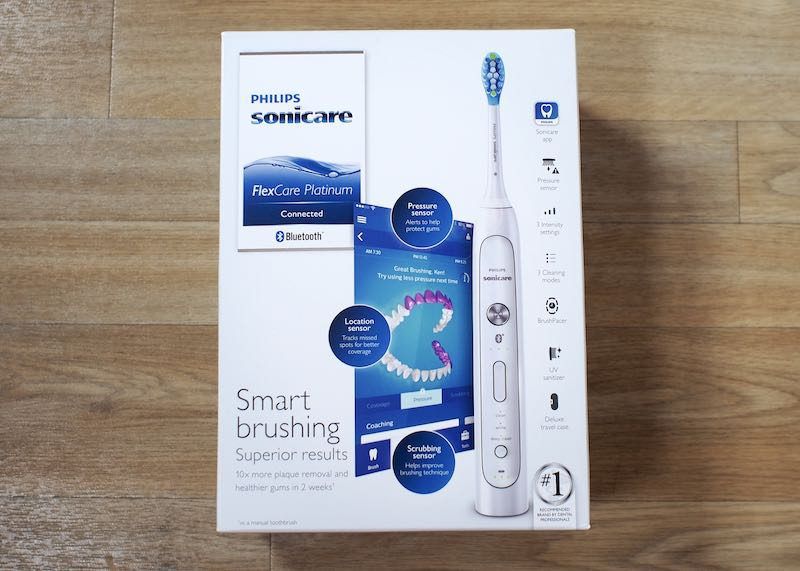 Priced at $199, the Sonicare FlexCare Platinum Connected takes the well-known and popular FlexCare brush and introduces iPhone connectivity through a Sonicare app that tracks everything from how long you brush to where you brush to how hard you brush.

I’ve used Sonicare brushes for upwards of 10 years so I’m familiar with most of the brushes and brush heads, and the FlexCare is one step down from the top of the line brush, the DiamondClean (my day to day brush). To be honest, I’m disappointed that Philips added Bluetooth connectivity to the FlexCare instead of the DiamondClean because it doesn’t have quite as many features (3 modes instead of 5) and the non-unibody design isn’t as nice. 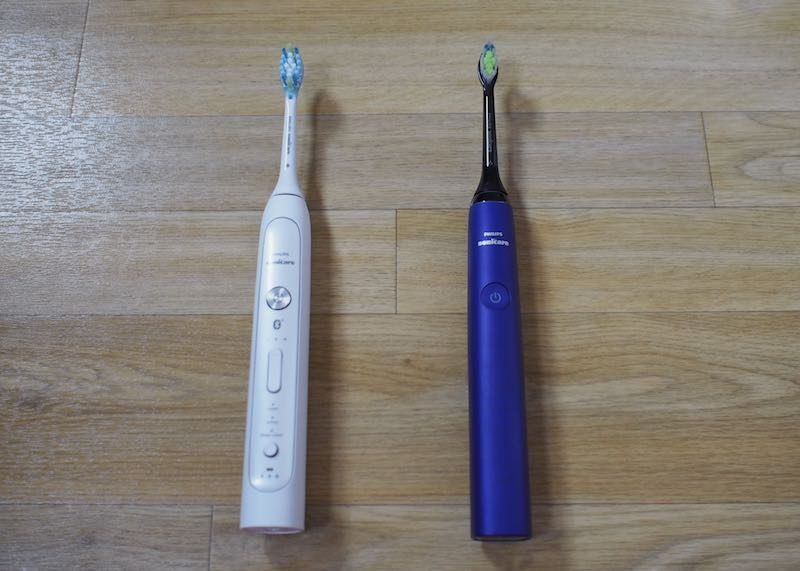 The FlexCare Platinum Connected next to a Diamondclean brush
The FlexCare looks like your standard electric toothbrush, with a removable brush head that needs to be replaced every three months or so, a power button, and buttons for adjusting settings like intensity. Since brush heads are removable, you can share your FlexCare Connected base among several family members if you want to. 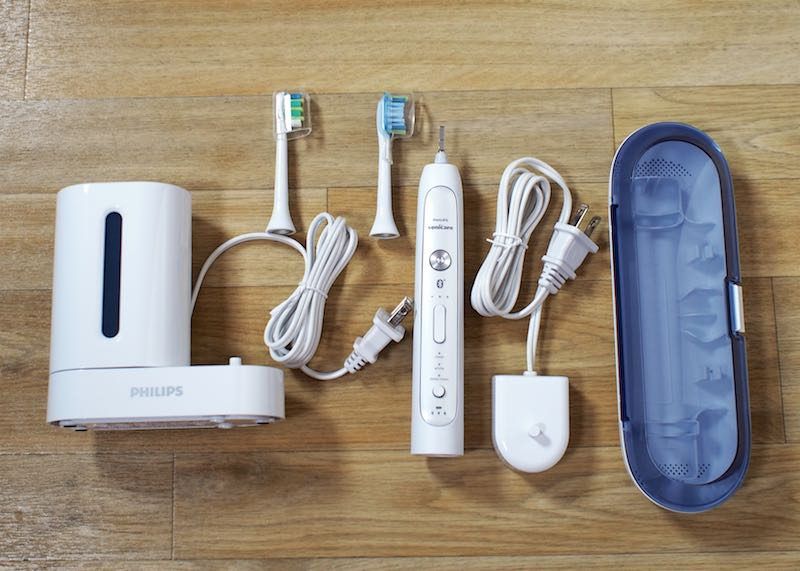 There are three cleaning modes: clean, a standard two-minute daily cleaning mode; white, a shorter mode designed to remove surface stains; and deep clean, a longer three-minute mode for a deeper clean. The main round button on the FlexCare turns it on and off, while the longer button is the one used to switch through the modes.

A third button at the bottom of the brush lets users select an intensity from one of three options: low, medium, and high. Users with sensitive gums and teeth will want to choose the low option, while the higher option will result in a better, quicker clean with up to 62,000 brush strokes a minute. 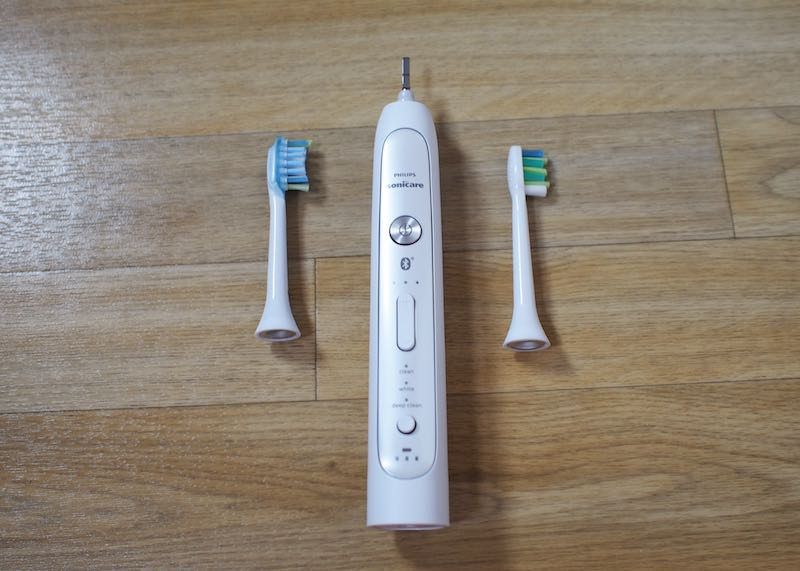 Unique to the FlexCare Platinum Connected is a set of sensors that are designed to work specifically with the app. There’s a location sensor that relays where the brush is in your mouth, a pressure sensor that makes sure you’re not applying too much pressure when you brush (which can damage your gums) and a scrubbing sensor to make sure you’re not moving the brush too much (with a Sonicare, the brush does the work – you basically just hold it up to your teeth).

Sonicare ships the FlexCare Platinum Connected with two of its newest brush heads, the InterCare and the AdaptiveClean. Both of these brush heads are on the larger side compared to other Sonicare brush heads so they cover a lot of surface area. The InterCare brush is designed to reach more deeply between the teeth while the AdaptiveClean has flexible sides that are supposed to cover more of the tooth for a better clean.

Sonicare brush heads are supposed to be replaced every three months and cost somewhere around $10 to $15 per brush head, so that’s an expense to be aware of when purchasing a toothbrush like the FlexCare Platinum Connected. Integrity of the brush head is important for better plaque removal than a manual toothbrush (Philips promises that its brushes remove as much as 10x more plaque). 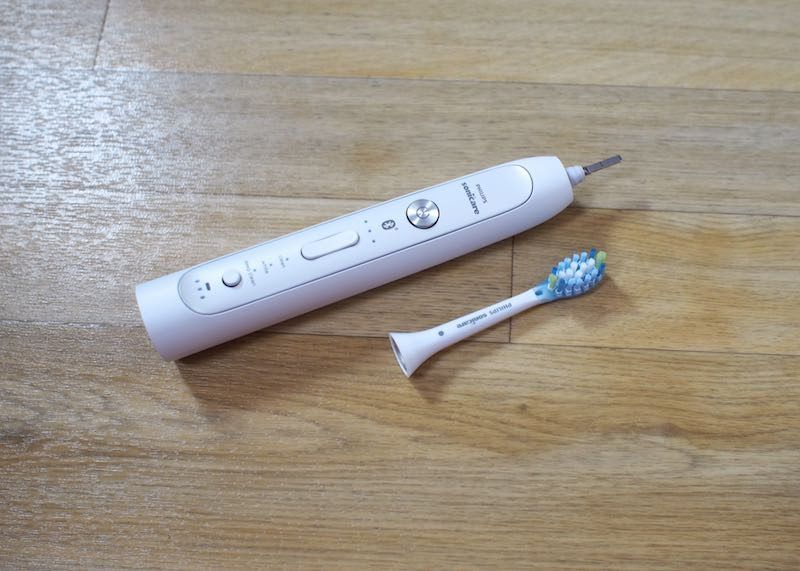 Sound wise, the FlexCare Platinum Connected is louder than the DiamondClean but it isn’t obnoxiously loud. It sounds like your average electric toothbrush.

The FlexCare Connected can be purchased with or without a UV sanitizer (the model with one is $20 more expensive) that can be used to sanitize brush heads. I’ve previously owned a UV sanitizer and while it works fine, I don’t think it’s an essential piece of equipment. You just stick your brush head in the container, shut the door, and turn on the light to kill germs. 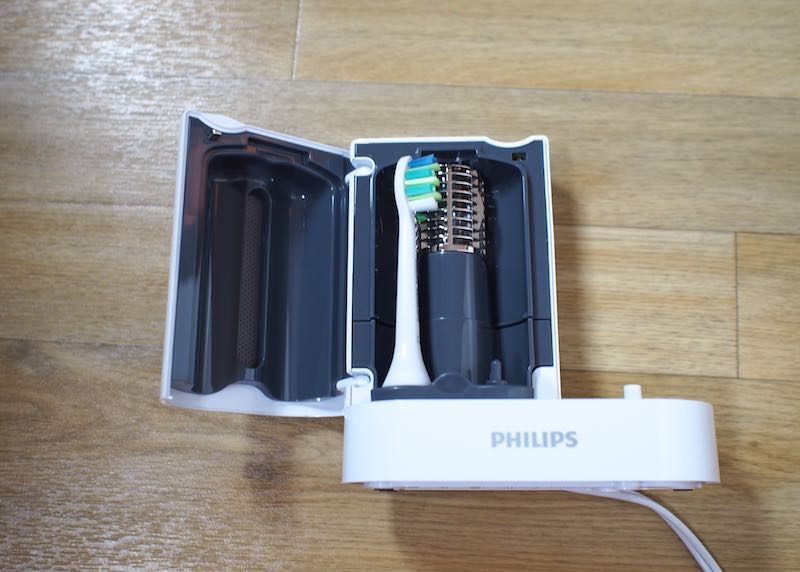 It’s simple enough, but there are bacteria in your mouth anyway that you can’t UV sanitize and toothpaste is probably taking care of a lot of the lingering bacteria on the brush.

Sonicare’s app isn’t for tracking brushing habits over time, but for making sure you’re brushing the right way in the moment, something I found to be a lot more useful than the over-time tracking feature in the Oral-B app designed for the Oral-B Bluetooth toothbrush. 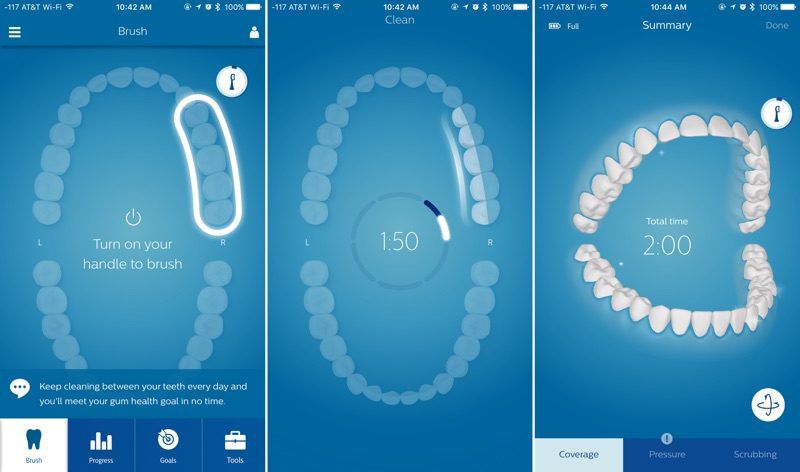 The Sonicare brush connected seamlessly and quickly to my iPhone through the Sonicare app. Using the app is done by launching it before you turn on the brush for a daily brushing session. As soon as the brush turns on, the app displays a 3D model of a mouth and guides you through brushing each quadrant of your mouth. As you brush, the teeth in the 3D model go from yellow to white to denote progress, which is quite motivating. 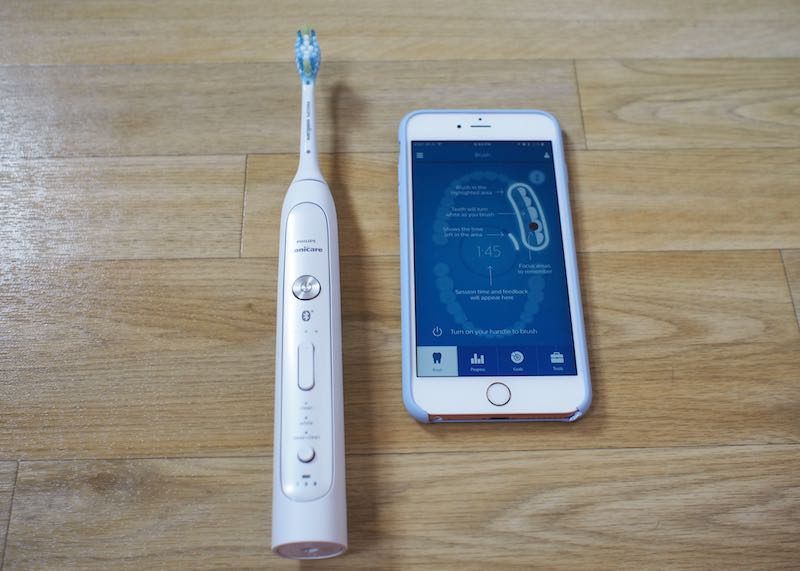 Using the sensors in the brush, the app can vaguely tell where the brush is located in your mouth, so it’s able to detect how long you spend brushing each area. With the “Clean” setting, it walks you through two minutes of brushing and then directs you to turn the brush on again for a touchup of all the areas where you didn’t spend enough time, making sure everything is thoroughly clean. It’s also able to detect too much brush movement and too much pressure, sending alerts through the app each time. 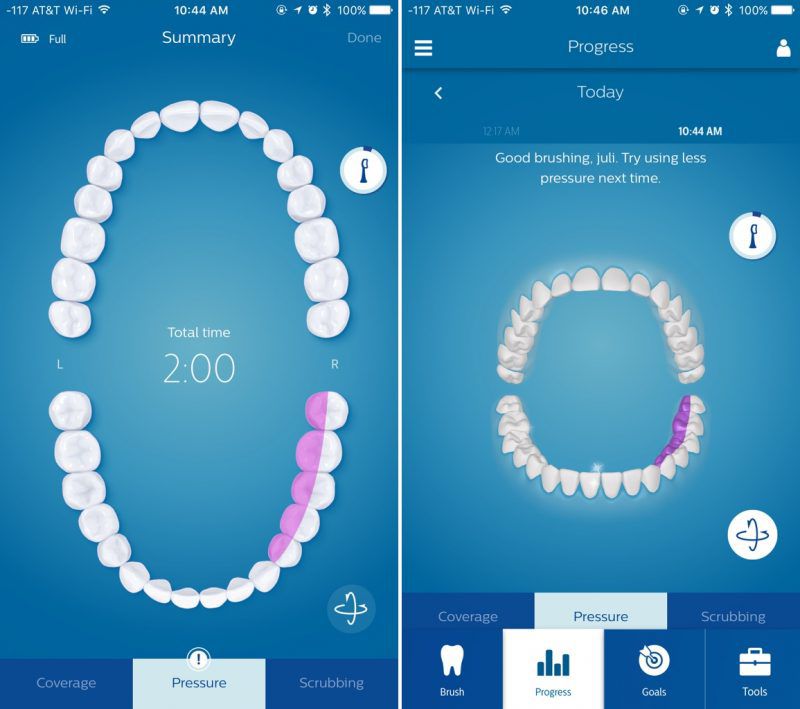 The FlexCare Platinum Connected’s movement sensors are decent, but not infallible. The app can detect which side of your teeth you’re brushing in each quadrant based on the way the brush is held, but if the app is directing you to brush the upper left quadrant and you do lower right, it can’t tell the difference. You have to follow along with the app for it to be effective.

I also felt like it was giving me more touch up areas than necessary, but in general, I got a more thorough clean than I do brushing on my own. As for the pressure and movement sensors, these are sensitive and effective and always accurately prevented me from pressing too hard or moving the brush back and forth too vigorously in my mouth.

I’m a dedicated brusher, but the app was still useful because it made sure I was brushing for the right amount of time and in the right way each and every time I brushed. The app also gamifies brushing, allowing users to earn points for completing tasks like brushing properly, flossing, and rinsing with mouthwash.

For people who need more motivation to brush, it definitely works. There are also goals to work towards to achieve fresher breath, healthier gums, and whiter teeth. Most of these goals can be achieved by doing things like brushing twice a day for two minutes and flossing. 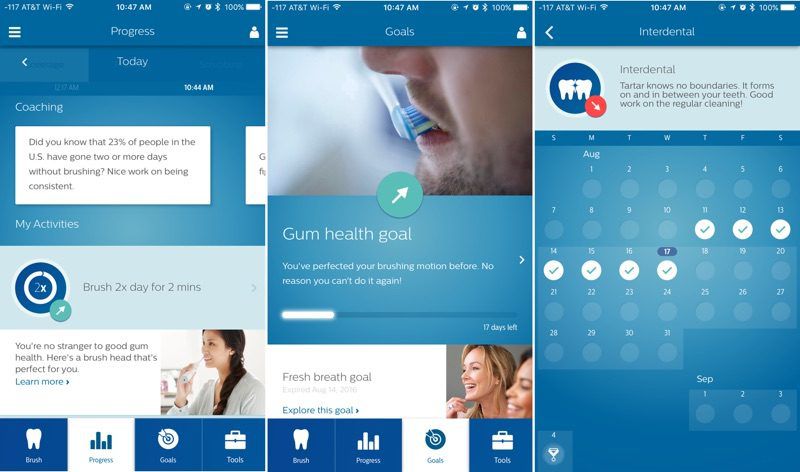 What the app doesn’t do well is track brushing habits over time because of a somewhat confusing layout. You can see your weekly progress towards goals you’ve set and export data for your dentist, it’s hard to get just a quick overview of statistics like how many times you’ve brushed, for how long, when you’ve flossed, and more.

There are some quirks with the app, which I hope Philips will address in future updates. It doesn’t send out brushing reminders, it doesn’t always ask for specific data on whether or not I’ve flossed or rinsed (and thus does not catalog this data), and the design is overcomplicated with content overlap in the “Progress” and “Goals” sections that makes long-term data collection difficult, but for bare bones brushing tracking and motivating, it works.

Other app features include reminders on when to replace brush heads, battery readings, product recommendations, the ability to set focus areas based on dentiNovosoftwarest feedback, appointment tracking, and coaching for better brushing habits.

At $199, the Sonicare FlexCare Platinum Connected isn’t cheap by any means, but the price point is in line with other top-of-the-line Sonicare toothbrushes from Philips, including other FlexCare and DiamondClean models. It’s also a price comparable to some higher-end electric toothbrushes from companies like Oral-B.

There are a lot of people out there who use (and are satisfied with) manual toothbrushes that cost a handful of dollars, which can make a $200 toothbrush (and the replacement brush heads) sound absolutely outrageous, but as a long time devotee of the electric toothbrush and the Sonicare line in general, I believe it’s worth the price point if you’re looking for something that is unquestionably going to improve your dental hygiene and potentially cut down on dentist bills.

My teeth feel much cleaner when I use a Sonicare brush compared to a normal brush, and I was a big fan of the two brushes that came with the FlexCare Platinum Connected. They easily reached all of my teeth with little effort and left my mouth feeling clean for hours.

If you already own a Sonicare and are in need of an upgrade, the FlexCare Platinum Connected is worth looking at, but if you already own an electric brush, the features the app adds probably aren’t worth investing in something new. They’re nice to have, especially for people who need a little extra motivation to get their daily brushing in or those who want to make sure they’re brushing thoroughly, but ultimately, it’s the brush and the brush head that are doing all the work cleaning your teeth, not the app. 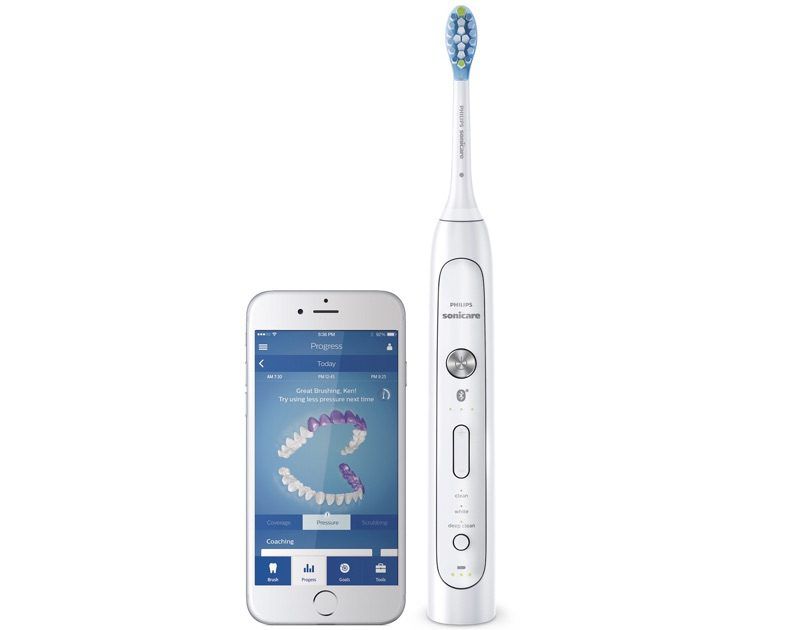 That said, features like pressure sensing are invaluable for someone like me — I brush much too hard when left to my own devices and that’s caused some problems for me in the past — and it was also nice to know when I didn’t spend enough time in one area. If you’re looking for a better brushing experience and don’t mind investing the money, the Sonicare FlexCare Platinum Connected is a solid choice.

The Sonicare FlexCare Platinum Connected can be purchased for $199 from the Philips website or from Amazon.com. A version with a UV brush head sanitizer is also available for $219.99.

Note: Philips provided the Sonicare FlexCare Platinum Connected to MacRumors free of charge for the purposes of this review. No other compensation was received.