QardioBase 2 is designed for tracking your weight as you aim to hit fitness goals. It measures not only weight, but also tracks body mass index and body composition, including muscle, bone, fat, and water content in the body.

QardioBase 2, as the name suggests, is Qardio’s second iPhone-connected smart scale. I reviewed the original QardioBase last year and was not impressed with the unstable design, but Qardio has made some significant improvements to its second-generation model and it’s a much better product. 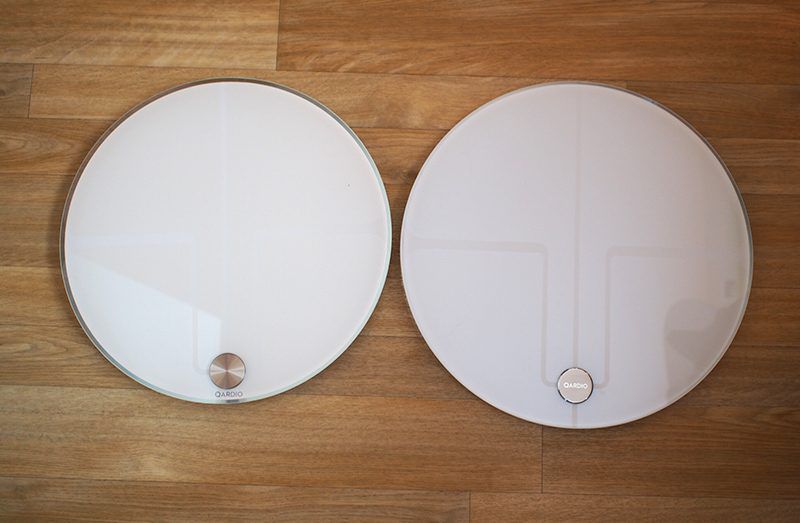 Original QardioBase on left, QardioBase 2 on right
QardioBase 2 is a simple circle-shaped scale with a clean white glass top that has some simple accent lines on the front. There’s a silver Qardio logo button at the bottom and several hidden LEDs under the glass that allow the scale to display weight and other information. 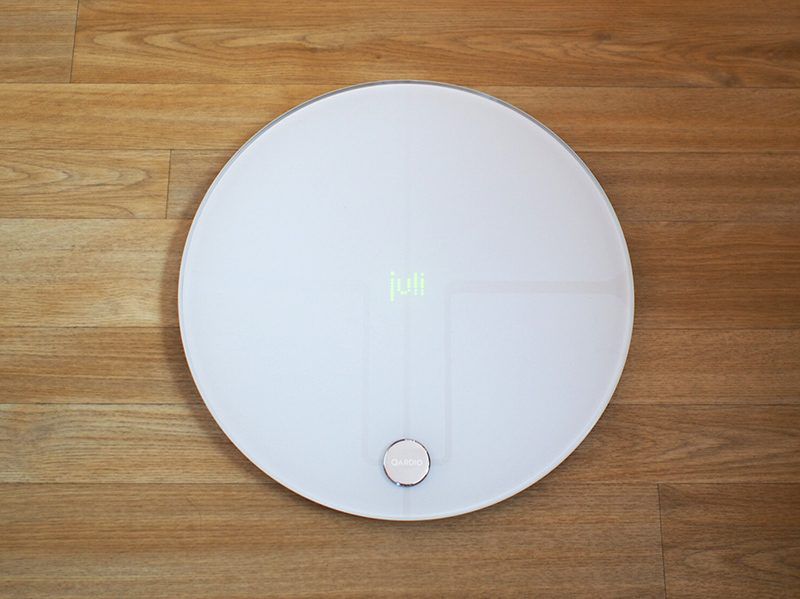 I tested the white version of the QardioBase 2, but there’s also a black color option to choose. Both the white and the black versions have black bases with rubber feet to keep the scale secure on the floor. 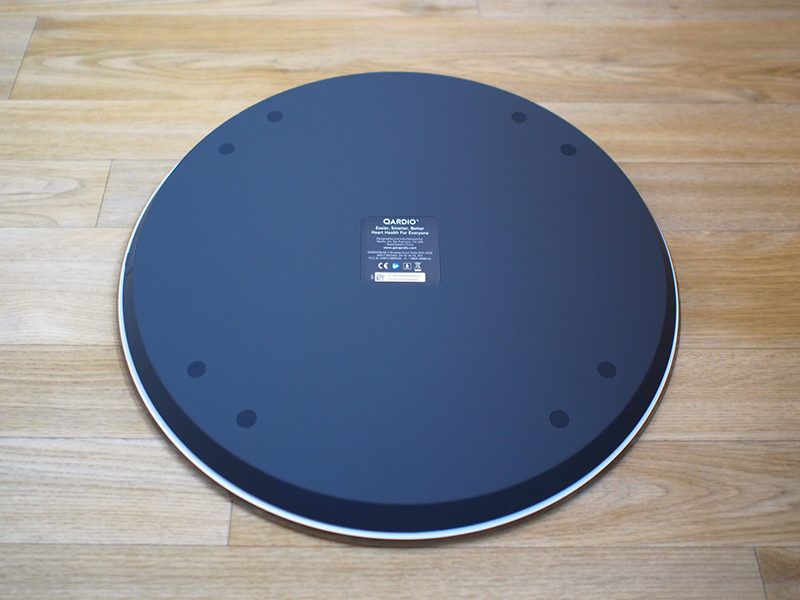 The original QardioBase had the same circular design as the QardioBase 2, but it had an oddly tapered design that made it tilt and tip if you stepped on the edge of the scale. With QardioBase 2, there’s less of a taper and a slightly larger base overall, so it’s steady at all times no matter where you step. 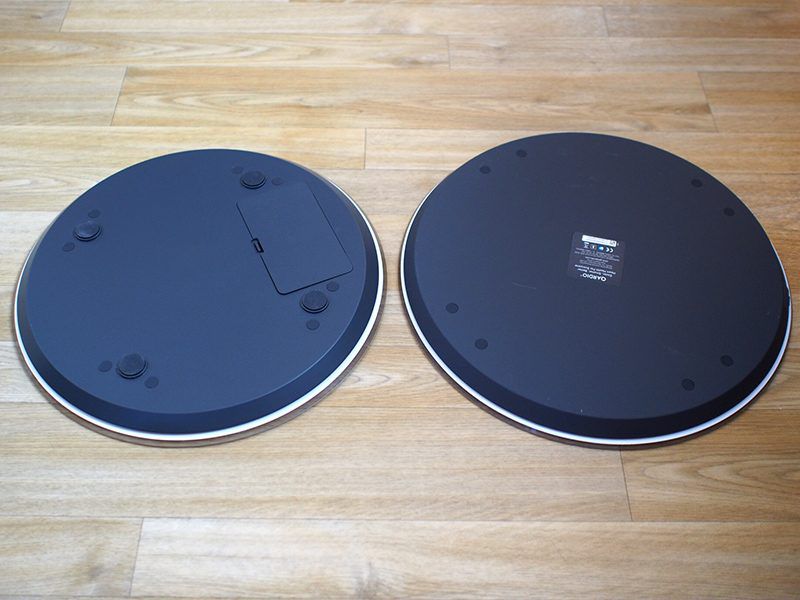 Original QardioBase on left, QardioBase 2 on right
While the original QardioBase required batteries, the second version does not. It uses a rechargeable battery that lasts for about a year before it needs to be recharged, and it can be plugged in and charged with a microUSB cable using a port at the side. Scales can eat up batteries within just a couple of months, so not having to buy and swap out batteries is a major plus. 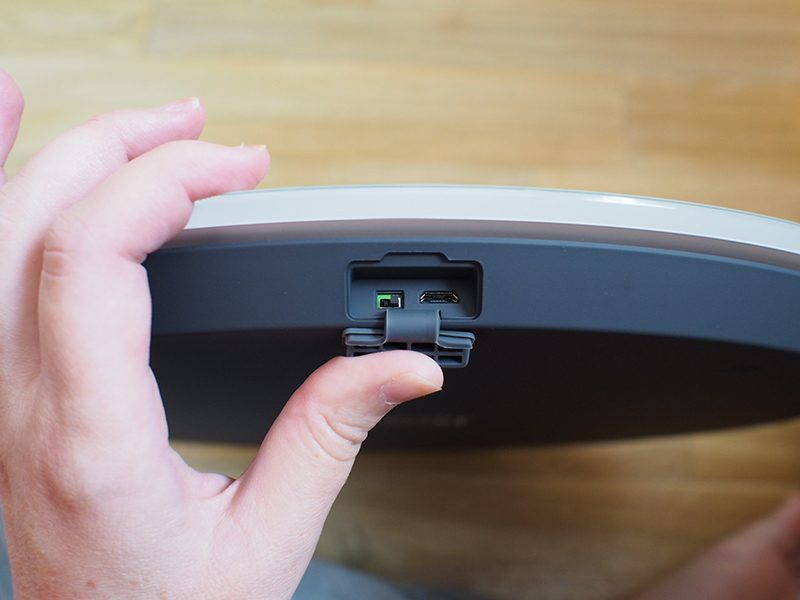 When you step on the QardioBase 2, it lights up with a happy face via the LEDs, and a haptic buzz lets you know it’s recording your weight. It displays weight measurement, fat total, and your name with each weight recording, but the scale also relays additional information to the Qardio app over a Wi-Fi connection with each weighing. 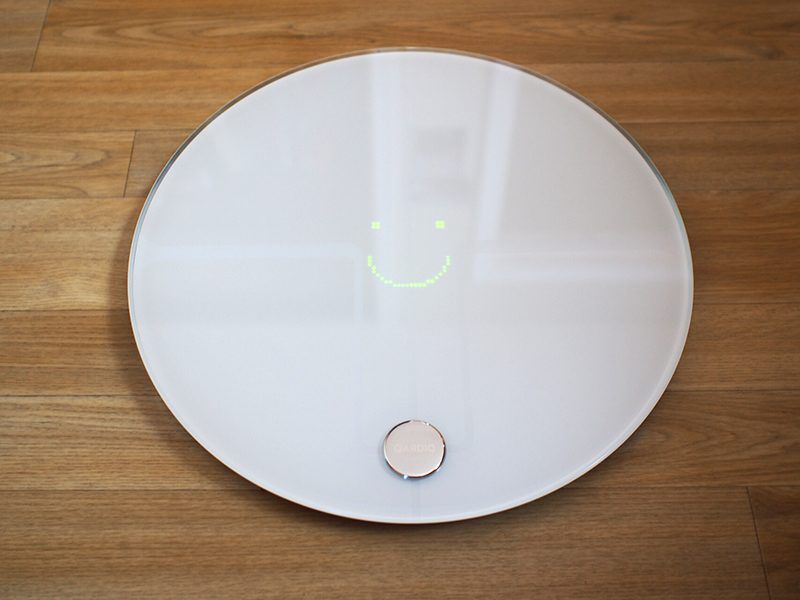 QardioBase 2 keeps track of the following metrics: weight, body fat percentage, muscle mass, water content, bone, and BMI. It uses bioimpedance to measure body mass, sending a small signal through electrodes on the top of the scale into your feet. Body composition is calculated through the electrical impedance, weight, and data like height stored in the Qardio app.

The scale needs to come in contact with bare feet for body composition measurements. If you have socks or shoes on, it will only provide weight information. You also need to be still for a few seconds — it can’t take an accurate measurement with movement. 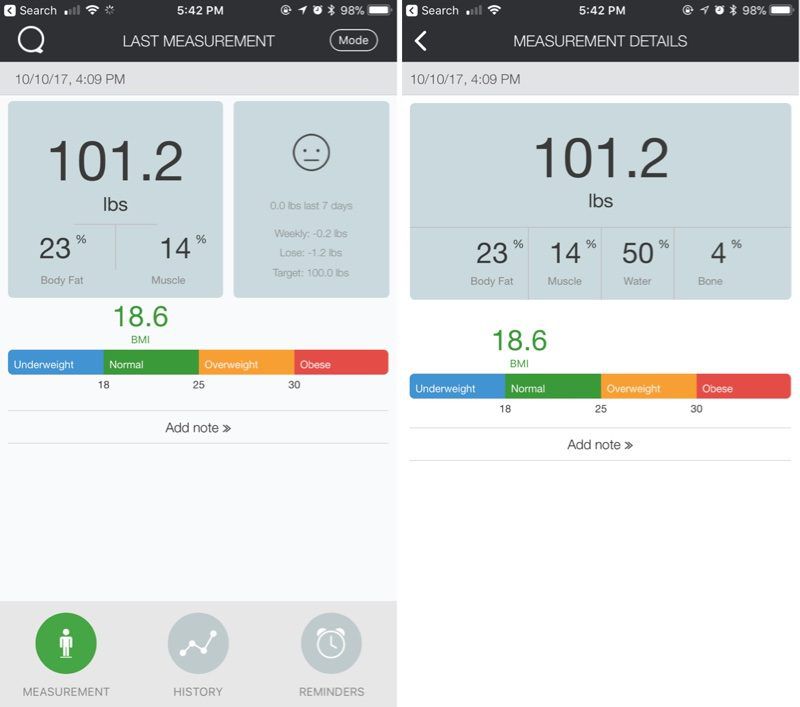 Qardio says its body composition calculations are estimates, with data intended for home use, but the company also told me that the majority of people will only see a single % digit discrepancy compared to a technique like hydrostatic weighing that uses water displacement for body composition analysis.

I can say without a doubt that my weight measurements are accurate, but it’s more difficult to tell with the body composition measurements without a medical test for comparison. I weigh right around 100 pounds, and QardioBase 2 gives me body fat measurements of 23 percent, with bone at 4 percent, muscle at 14 percent, and water at somewhere around 50 percent depending on the time of day.

I don’t know how accurate those measurements are, especially the muscle number, but scales that use bioimpedance, like the QardioBase 2, are meant to track progress and body composition over time rather than offer up spot on single measurements.

So while there’s no way to tell if these measurements are right sans professional testing, I can see how they change over time with exercise and diet changes, and that’s really where the QardioBase 2 shines. 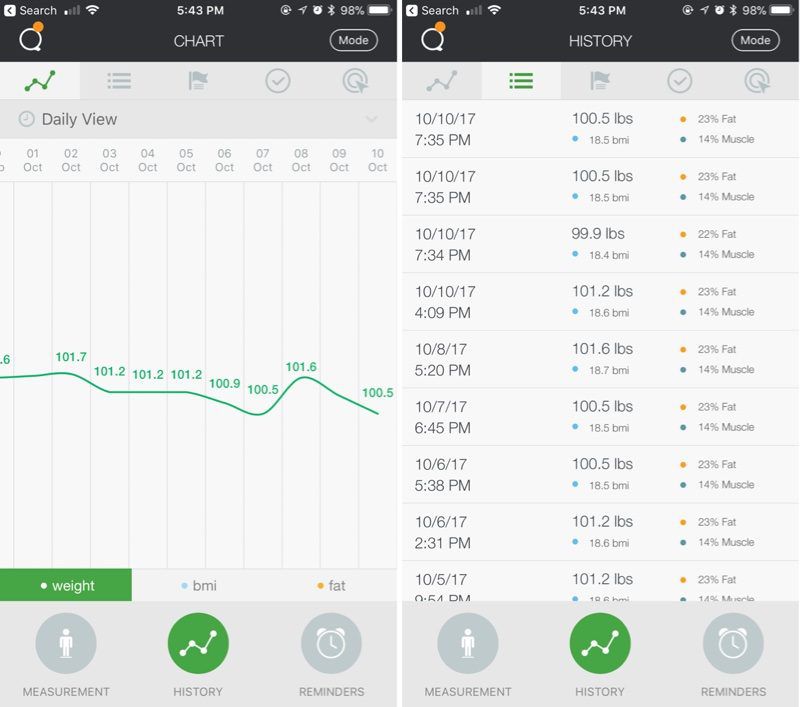 Someone aiming to lose weight, cut down on body fat, or gain muscle is going to be able to track changes in body composition over time and though the initial measurements may not be accurate, the degree of change is.

Qardio says body composition measurements are most accurate when taken at the same time and in the same conditions. Analysis can be inaccurate if a measurement is taken with a high alcohol level, high caffeine level, intense sports activity, dehydration, or after a heavy meal. Measurements can also be affected by body type, but even in these situations, tracking change remains reliable.

To estimate your body composition and BMI, the Qardio app needs your height and weight. You can also enter a weight goal and the app will display your progress alongside your most recent measurement.

In the History section of the app, all measurements over time are displayed, with daily, weekly, and monthly graphs for weight, BMI, and fat. There’s also a list of all measurements sorted by date and time and a calendar view that displays each dnovodasoftwareay a weight measurement was taken. With Health integration, all of your measurements can also be added to the Health app. 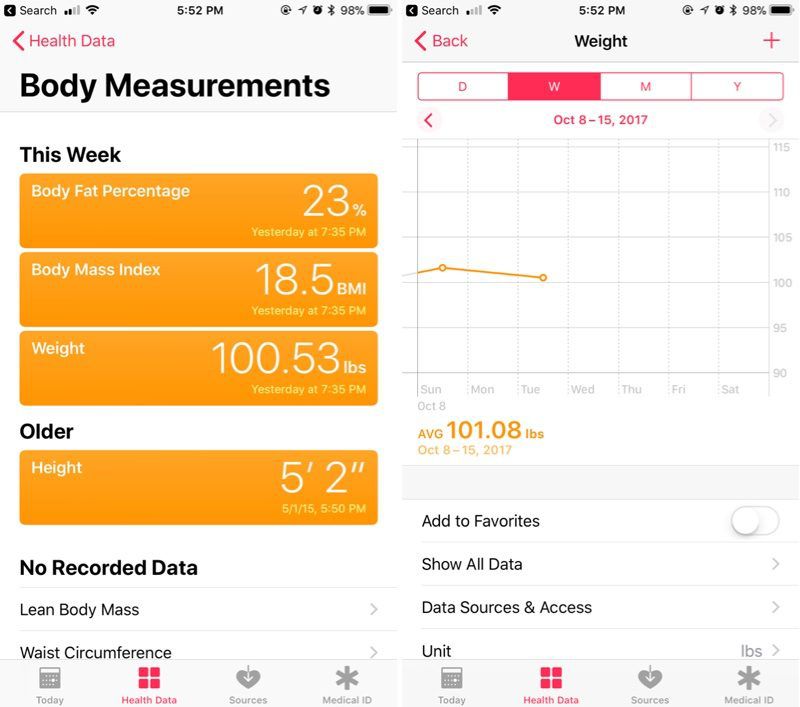 Since Qardio recommends taking measurements at the same time each day, there’s an in-app option for setting a reminder for yourself. 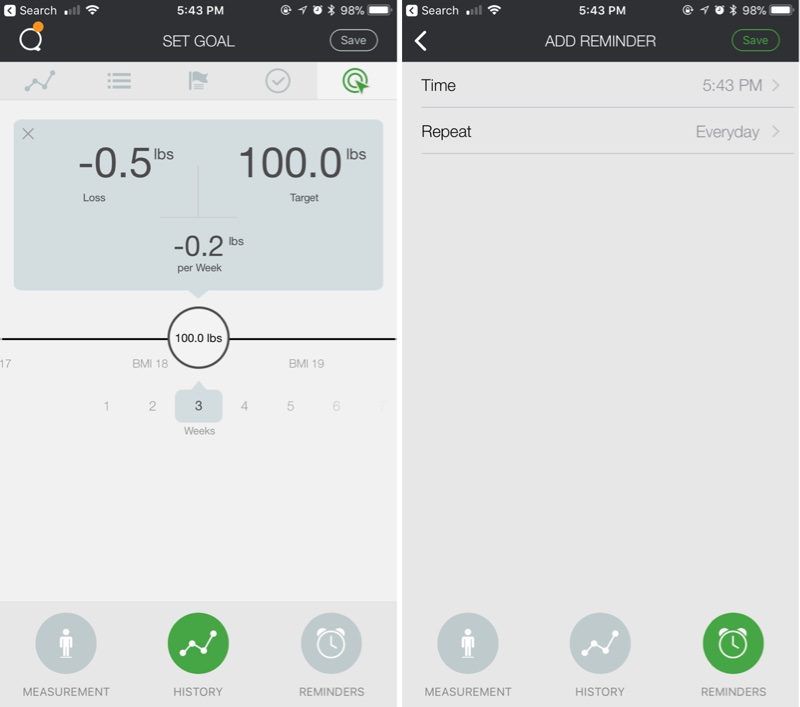 The features that track body composition can be disabled through the Qardio app by turning on a Weight Only Mode, and Qardio recommends this for customers who have implanted electronic medical devices. There’s also a Pregnancy Mode and a Smart Feedback Mode along with the normal mode that displays weight and fat percentage with each measurement.

With Smart Feedback Mode, QardioBase 2 will display facial expressions like sad faces and happy faces to indicate your progression towards your ideal weight rather than your actual weight measurement, which is ideal if you’d rather be encouraged by a happy face instead of a number. Your weight and body composition information are still stored in the app for reference.

Pregnancy Mode is similar to Smart Feedback Mode and will display a smile instead of weight along with offering additional in-app tools for tracking weight change during pregnancy. With all modes, you can add notes each day to track lifestyle changes that might have had an impact on different measurements. 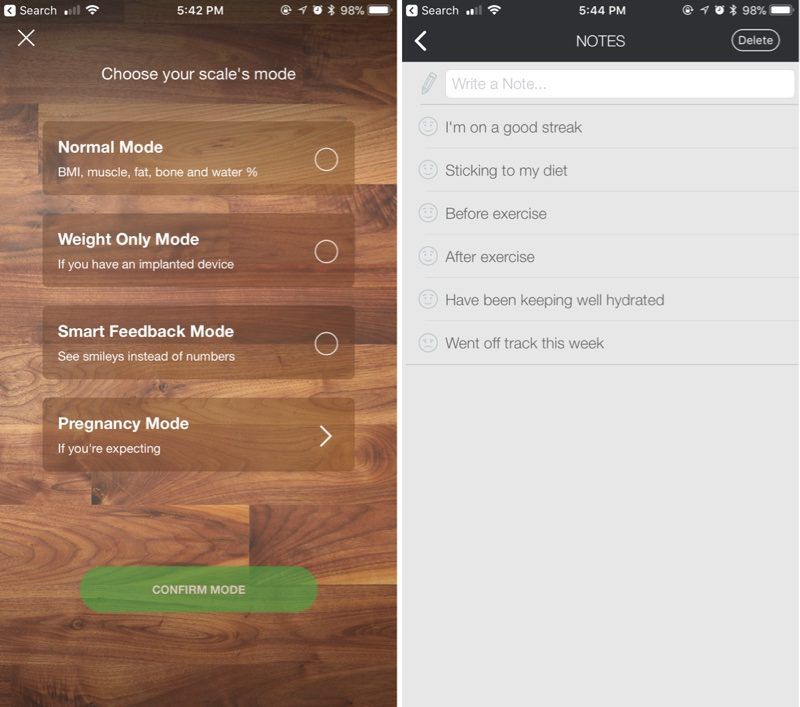 QardioBase 2 can be used with up to eight users, but each person needs to create a Qardio account in the Qardio app to allow the scale to distinguish between users. QardioBase 2 seems to detect who is on the scale based on weight and body composition, and when someone who does not have an account steps on the scale, it displays weight but does not add the info to a user account. 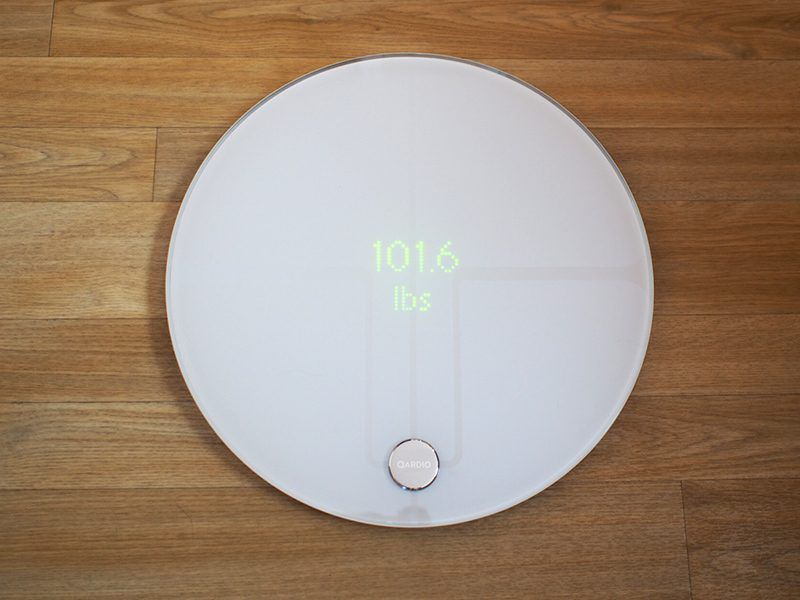 During my time testing the scale, it’s been entirely reliable in regard to connecting to my iPhone and transferring over data via Wi-Fi. After a measurement, it takes just a few seconds for it to be visible on my iPhone, and the Qardio app in general is simple to use with an intuitive interface that makes all my data visible at a quick glance.

Also, if you have other Qardio products, it’s all the same app, so you can view multiple metrics without needing to switch apps.

You can get a quality scale for about $15 to $25 on Amazon, so $150 is a lot of extra money to shell out for iPhone connectivity and body composition measurements.

No one needs a smart scale, but for people who want to track weight loss or fitness gains, it can provide some extra motivation and a more tangible way to track progress over time using metrics beyond weight. There are also people out there who like to track a wide range of health data for an overall picture of body health, and the scale is great for that purpose since it uploads to the Health app.

Compared to the original QardioBase, QardioBase 2 is a huge step up in terms of design and accuracy. Qardio clearly took user feedback into account when developing the QardioBase 2, and it shows. The scale is sturdy and stable when I step on it, the weight measurements are consistent, setup is easy, and the app has all of the tracking features I want.

Small touches like haptic feedback to mark a measurement and the simple smiley face when stepping on the scale set QardioBase 2 apart from its competitors and make it well worth consideration if you’re in the market for a smart scale.

The QardioBase 2 can be purchased from the Qardio website or from Amazon.com for $150.

Note: Qardio provided MacRumors with a QardioBase 2 for the purpose of this review. No other compensation was received.