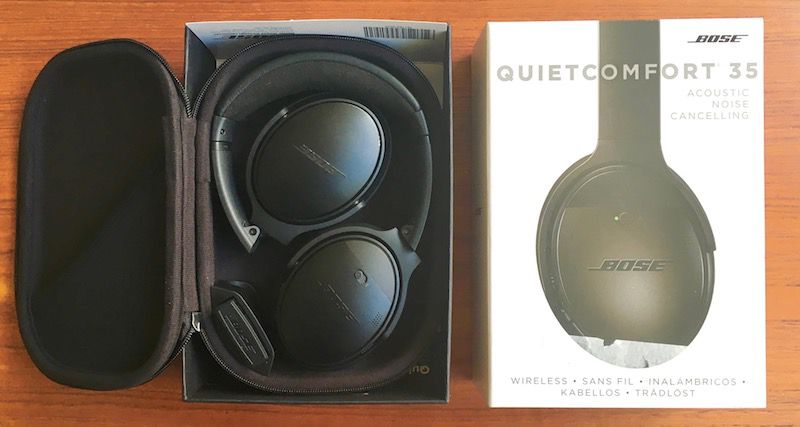 With the controversial absence of a headphone jack on the iPhone 7 now a reality, accessory companies are busily churning out wireless alternatives, and that’s as true of Bose as it is of other big audio brands.

Its latest QuietComfort 35 over-the-ear headphones ($350) are a wireless version of the company’s flagship premium QC25 cans ($300), seen by some as offering the best active noise-canceling in the business.

The QC35’s retain the same established design and patented ANC smarts, so as an owner of a pair of original QuietComfort 25 headphones, I was interested to see how the new Bluetooth model compared.

The box that the QC35’s come in is reminiscent of the QC25’s, and the included compact travel case that the cans fold up into boasts the same assured sturdiness. You get a thinner 1.2 meter lead for wired connections, a micro-USB to USB-A charging cable, and the same airline adapter is also included.

Taking the QC35 cans out though and weighing them against the wired model, it’s clear the transition to Bluetooth meant the QC35’s had to put on a little weight – 115 grams’ worth, to be exact, for a total of 309g. So what brings the added heft?

As you can see from the pictures, cosmetically there’s very little difference between the two models. The steel headband has been marginally widened, and the single AAA battery compartment has been replaced by an integrated, non-replaceable battery (rated up to 20 hours in wireless mode and up to 40 when wired), with a micro-USB port for recharging. 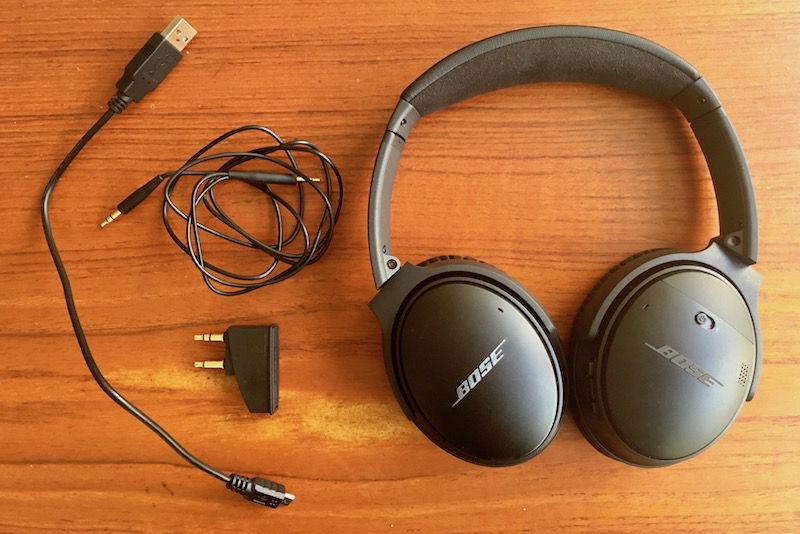 Hidden inside the metal-capped ear cups is a dual-microphone system that filters out ambient noise with equal opposing audio waves generated by two proprietary ANC signal processors, which help to pick up your voice during calls, too.

Also new is a dynamic volume-optimized EQ, built-in voice prompts, and a trio of physical controls along the edge of the left can: set between two volume buttons is a larger multi-function button that controls playback, takes and ends calls, and can also initiate Siri with a long press. 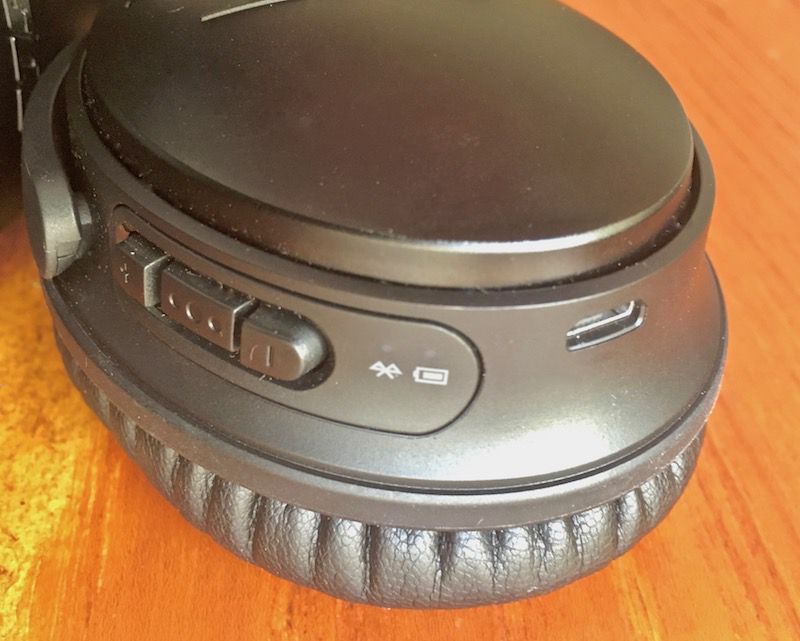 The Bluetooth pairing mechanism has been integrated into the original power switch and is activated by sliding and holding the switch until the power LED flashes blue. Wireless range is stated as 33 feet (10 meters), which bore out in subsequent tests.

Equalizers and sound profiles don’t feature in the Bose Connect app, presumably because Bose is satisfied that the integrated digital EQ takes care of all that. It leaves the software options extremely basic, limiting you to manage paired devices, select an auto-off timer, update firmware, disable voice prompts, and change language. 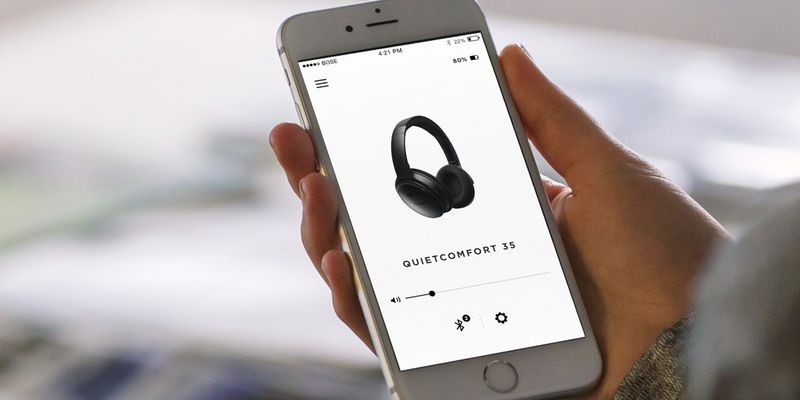 The QC35’s paired easily with my iPhone 6s, iPad mini 4, and MacBook Pro, and the only time the connection dropped was when I was listening to music in the kitchen and the microwave was on. The cans had no trouble pairing with two devices and switching dynamically between them, and all my devices were remembered later and re-paired automatically.

The controls felt well placed, if not as intuitive as the QC25’s inline remote, and a couple of phone calls were taken while walking along the street, with the new ANC-microphone pairing doing a good job of minimizing ambient noise without detracting from voice clarity during conversation.

Despite the extra weight, the QC35’s never felt uncomfortable to wear, even when I did so for long periods. The widened headband seems to be the masterstroke here, offsetting that extra weight equally between the pivots and cups, while undoubtedly being helped by the soft synthetic leather cushioning that surrounds each ear. In terms of comfort, these headphones really are up there with the best. 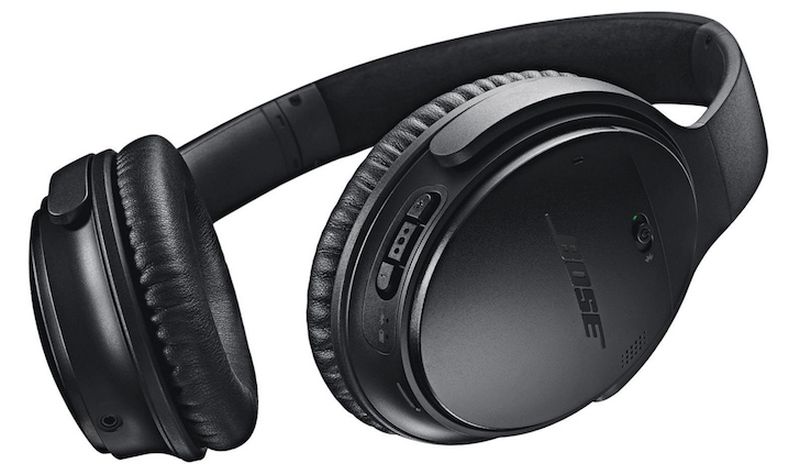 Audio-wise, the QC35’s didn’t disappoint either, delivering well-heeled bass and excellent sound separation, especially with instrumental music. They do lose a bit of oomph in the mid-range when listening in wired mode when the ANC is off, but the Bluetooth battery life was long enough for it not to be a significant concern. Plugged into a MacBook Pro, a full charge took about two hours – fine.

The entire listening experience really benefitted from the always-on ANC – effectively silencing the drone of jet engines during a domestic flight, for example – while the low-level hiss characteristic of noise-canceling systems was barely audible, even at low volume. Whether sat in my living room or stood on a sardine-can commute, I was left with the overriding sensation of being pleasantly cocooned in a private bubble of sound.

I’ll miss the QC35’s. The cans’ interchangeable, dynamic pairing between my iPhone and MacBook quickly became second nature as I switched between devices, leaving my wired QC25’s feeling positively pass in comparison. Besides the practicality of Bluetooth though, there’s very little between them.

The superior quality of Bose’s patented noise canceling is so well established these days that casting judgement on it almost feels redundant. Having said that, I don’t consider Bose’s ANC untouchable, with similar systems on cans like the Parrot Zik‘s and Sennheiser PXC-550’s now offering almost-as-good if not equal performance in recent tests. I didn’t notice any real improvement over the QC25’s ANC either, so you could make the case that Bose has stood still while its rivals have caught up.

That’s not to take anything away from the QC35’s, though. In terms of marrying comfortable sound isolation with quality audio reproduction, they’re still the complete package. Does the $50 hike on an already premium-priced set of headphones justify the transition to wireless? Maybe not, but it’s less a matter of ‘courage‘ than it is one of convenience.

There are a couple of other caveats. The rechargeable battery isn’t replaceable like the Parrot Zik 3.0’s (for instance), which could put off some. The powered ANC doesn’t work in wired mode when the battery is dead either, but the passive isolation offered by the seal oNovosoftwaref the ear cups does provide a decent buffer against noisy environments.

The Bose QuietComfort 35 headphones cost $349, are available in black or silver, and can be ordered on the Bose website. 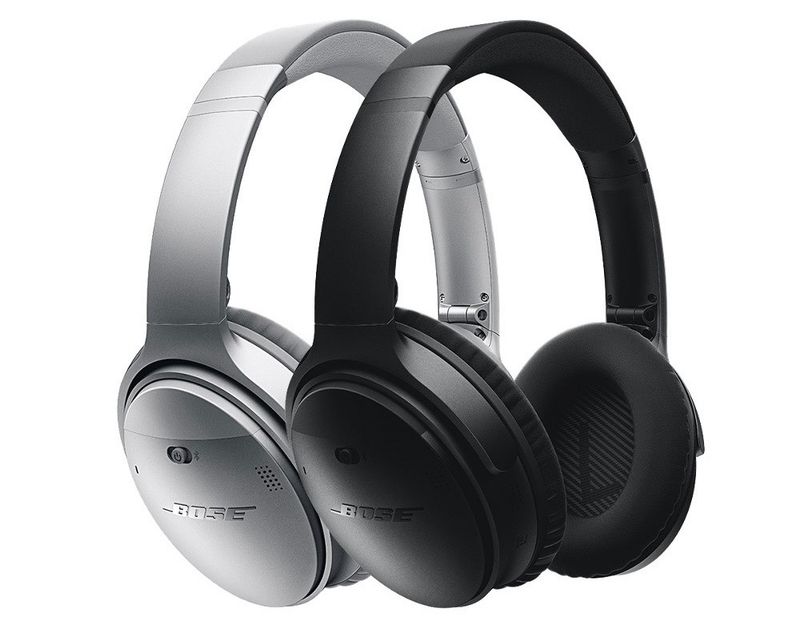 Note: Bose loaned the QC35 headphones to MacRumors for the purposes of this review. No other compensation was received.

Update: The Bose QC35’s come with a micro-USB port, not mini-USB, as originally stated in error.