Sony threatened to topple the apple cart in 2016 when it unleashed its flagship MDR-1000X cans on a headphones market which up until then had been dominated by Bose in the premium travel-grade noise-canceling department.

Combining excellent wireless sound with active NC that made even QuietComfort fans sit up and take notice, Sony’s awkwardly named headset proved that the Japanese company’s extensive acoustic R&D had finally hit on a winner, giving rival NC headphone makers due cause for worry in the process.

Unsurprisingly, Sony has sought to improve upon this winning formula in the intervening years, starting with another tongue-twisting rebrand of its flagship range (the inexplicably named WH-1000X series) and two follow-up models boasting incremental improvements, both of which have been well received.

What’s perhaps more surprising about these developments is Bose’s lack of response to them, having released in that time only a tweaked version of its flagship QC35 cans with support for Google Assistant. Whether that’s down to complete confidence in the quality of its existing noise-canceling smarts or just lack of innovation is a moot point, given that Sony’s adaptive NC technology and sonic prowess has essentially overtaken the company, as these latest cans exemplify.

The WHX-1000XM3’s are essentially an upgrade to last year’s 1000XM2’s, featuring a series of minor improvements that Sony believes collectively justify a new model number. Let’s take a look at them and see just how far the company’s noise-canceling range has come.

On the face of it, Sony’s WH-1000XM3 headphones boast the same design signature of previous 1000X models. They’re available in two understated colors – beige and black – and the ear cups swivel inwards so they pack up neatly in the supplied carry case. The only distinctive marks on the outside of each cup remain the minimal Sony logos and tiny microphone grilles, although they have picked up some neat brass-colored accents. 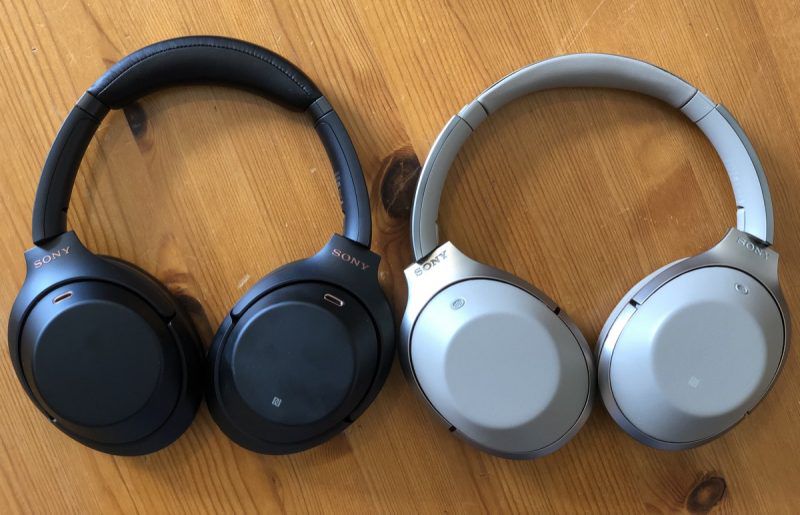 Sony WH-1000XM3 (left) beside original MDR-1000X headphones
A closer look reveals more notable differences though. Gone is the exposed steel headband, which is now concealed between the adjustable slats under thicker, more comfortable padding than on previous models. The foam urethane ear pads are also slightly larger and cushier, and allow for a deeper ear space inside.

The most obvious ergonomic shift to occur however is in terms of weight. The XM3’s are 22 grams lighter than the XM2’s (and 10 grams lighter than Bose’s QC35 II’s) which might not sound like much, but after wearing them for several hours straight it does make a real difference. 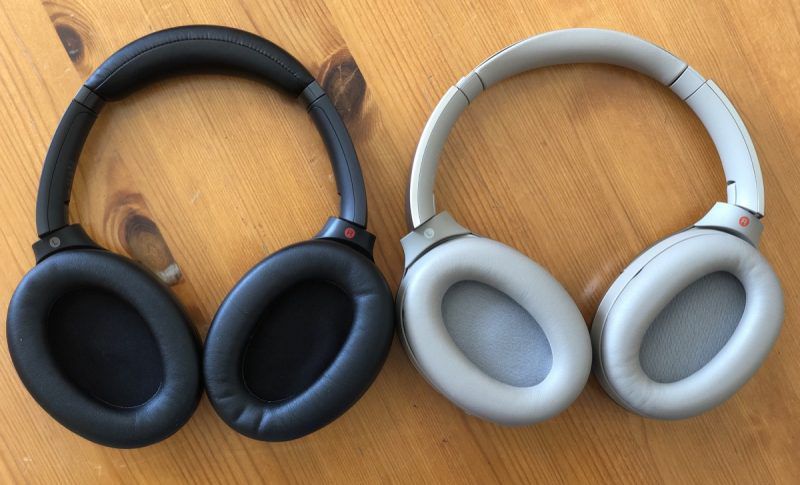 Sony WH-1000XM3 (left) beside original MDR-1000X headphones
Like previous cans in the WH-1000X range, the two buttons on the left ear cup control power and noise-canceling/ambient sound features, making blind selection a lot easier than the indistinctive three-buttoned affair on the original MDR-1000X cans. As before, the power button can be quickly pressed for a battery level update, and a long press activates the pairing sequence, while software-based options let you change the function of the ambient sound/NC button (more on those later). Unfortunately, the blue LED next to the power button still continually flashes during operation, which can be vaguely annoying if you’re wearing them in the dark.

Sony has also switched up the connectivity in this model: The microUSB port on the right ear cup is gone, replaced with a more up-to-date USB-C connection (the charging cable terminates in USB-A). One thing that hasn’t changed is Sony’s love for gesture controls: The right ear cup has a touch-sensitive back that responds to taps and swipes to control music playback, skip tracks, change volume, and invoke your preferred virtual assistant. Like most modern headphone gesture pads, it can also be used to take calls. The gnovodasoftwareood news is that the material Sony is now using to coat the pads is a little smoother, which makes the gestures in general a lot more responsive than models past, so kudos for that.

As we mentioned at the start of this review, Sony pulled something special out of the bag when it released its MDR-1000X headphones, which boasted next-level noise cancelation previously only achieved by the likes of Bose. With the 1000XM3’s, Sony has somehow done it again and made these cans four times more effective at damping down sounds from the outside world than the 1000XM2’s. After plenty of testing, we can state that they consistently outperform Bose’s flagship headphones when it comes to killing external noise in a range of environments and use cases. 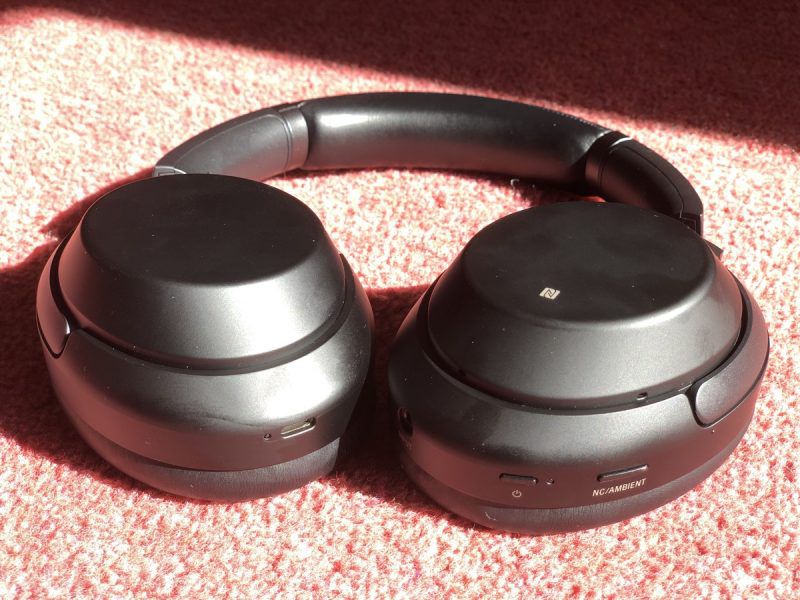 This stepwise improvement is partly to do with the ambient sound controls being more flexible and a little smarter than previous models. Fire up the Sony Headphones Connect app and you can manually drag a slider that changes the degree of noise-cancelation, allowing you to select maximum isolation, wind noise reduction, or choose from among 20 levels of varying ambient attenuation. It’s great for finding your ideal NC range while you’re stationary, but you can also switch to adaptive sound control when you’re on the move and the built-in QN1 processor will do just as good a job, automatically adjusting its corresponding inverted frequencies to block out whatever environmental sounds come your way.

As before, the headphones make low-frequency sounds like jet engines and traffic swiftly melt away, but Sony has also improved its proprietary chip in this model to attenuate high-frequency sounds like voices. That doesn’t mean you won’t hear when someone shouts at you from the other side of the room, but it does make short work of background chatter in a busy coffee shop. On the flip side, the Focus on Voice feature is much better than its earlier incarnation. It aims to let you hear in on important announcements – when you’re waiting to be called to a boarding gate, say – while still allowing you to enjoy your music in relative quiet. The old Voice mode had patchy performance and often failed to filter out other ambient sounds, but the WH-1000MX3’s are much more discriminating in this regard. 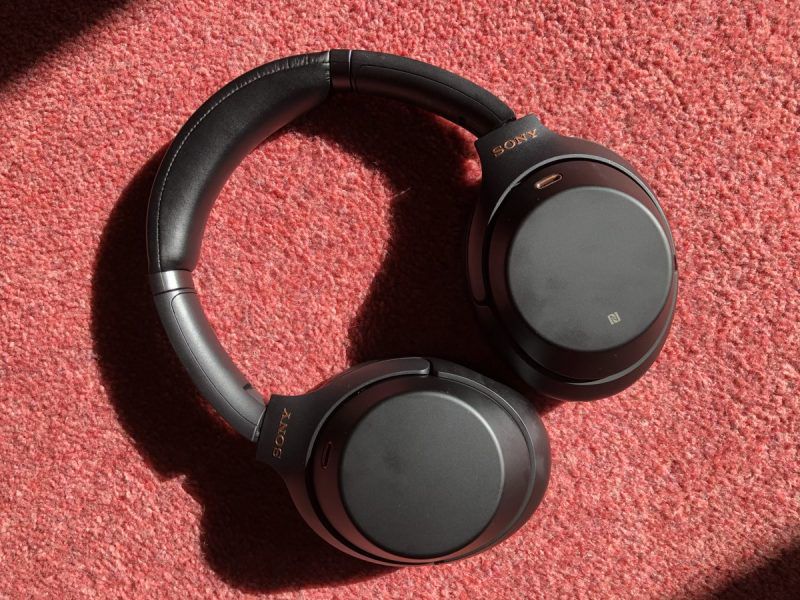 The QN1 chip doesn’t just excel at controlled NC either. Sony has also thrown in an onboard DAC and an analog amplifier, along with 32-bit audio signal processing and support for reproducing the full range of frequencies up to 40 kHz. Those smarts allow the cans to consistently deliver a higher signal-to-noise ratio and lower distortion, and allowed me to enjoy clear, crisp audio in all of the supported AAC (iPhone), aptX/aptX HD (Mac/Android), SBC (everything) and LDAC wireless codecs. The mid-range remains wonderfully balanced and the highs sparkle on instrumental tracks, while a powerful yet controlled bass provides a solid foundation.

You’d be forgiven for thinking all the tech in these cans would inevitably be a power drain, but Sony impresses by eking out 30 hours of wired/wireless battery life on a single charge, and you can get five hours’ worth of charge after just 10 minutes connected to a power outlet with the optional AC adapter (as opposed to 70 minutes on the WH-1000XM2’s). That gave me oodles of time to play with the additional app features, including the sound position controls that let you change the perceived directional source of your audio, not to mention the welcome surround sound modes and EQ sliders. 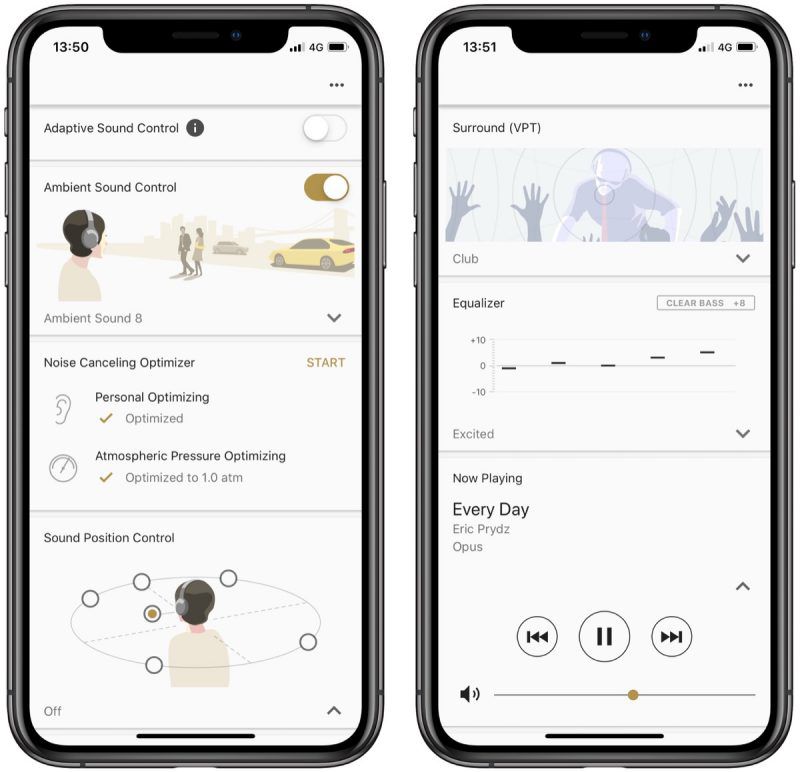 Digging deeper into the software controls, it’s now possible to adjust the automatic power-off feature, which is activated when no audio signal is detected. You can even turn it off, which is super-convenient if you just want to have NC active without listening to audio. You can also optionally change the function of the NC/ambient button on the left ear cup to activate Google Assistant, Siri, and (most recently added) Alexa. It’s a neat way to quickly ask general queries, but it also means you can use your virtual assistant of choice to play music and skip tracks on the fly.

Happily, Sony has also carried over all its popular features from previous models. The left ear cup still includes an NFC chip for fast pairing with compatible devices, while Sony’s unique innovation in the NC space lives on: Hidden inside both ear cups are the same microphones that Sony’s “personal NC Optimizer” uses to sample ambient noise and cancel out a wider range of sounds with corresponding inverted frequencies. Hold down the NC button, and the headphone speakers emit a series of tones that bounce back and forth between the mics to analyze the shape of your head, work out whether you have big hair, wear glasses, and so on. 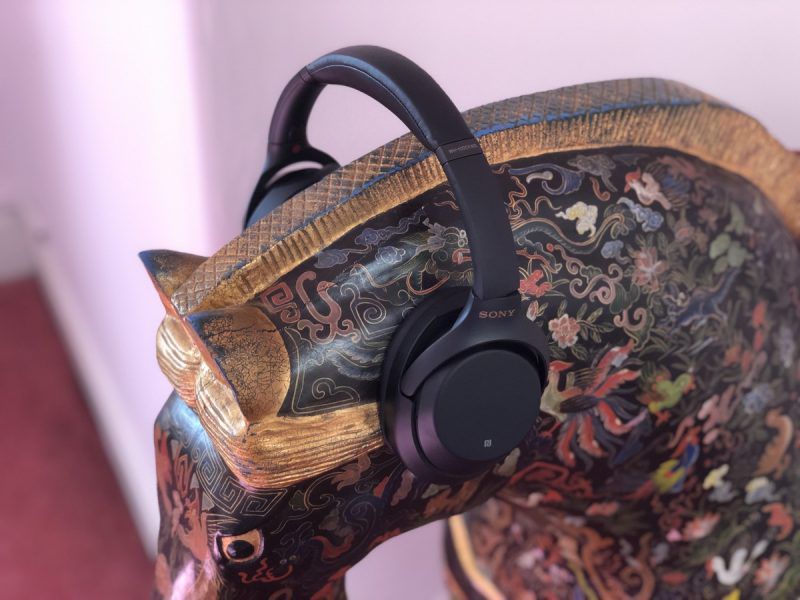 Sony has actually tweaked the optimizer in this model to include atmospheric pressure, and I found it to work better during flights. This was easy to test thanks to another feature unique to the company’s Sense Engine, called “Quick Attention.” Cup your fingers over the right ear cup and the volume instantly lowers to let in the outside world – bring your hand back down and the music returns to its prior volume. It’s genuinely useful for situations in which you’d usually have to take off the headphones – like when a flight attendant offers you refreshments.

As with previous models, the WH-1000XM3’s pack one of the strongest Bluetooth connections I’ve come across in headphones, and consistently retain a connection in areas where rival Bluetooth headsets regularly falter. By default, the headphones automatically select the highest quality Bluetooth protocol available, but you can still manually switch the priority between most stable connection and highest audio quality, which is now done in the iOS app.

Before we wrap up, it’s worth noting that, inexplicably, Sony’s 1000X range still doesn’t support dynamic switching between audio sources. Bose’s QC35’s have no trouble pairing with two devices and automatically switching between them based on which one is transmitting an audio signal, so it’s baffling that the 1000XM3’s lack this ability, and in our Bluetooth saturated age, it’s hard to overstate just how convenient the feature is. Having to manually disconnect the 1000XM3’s from your ‌iPhone‌ so that you can connect to your Mac and vice versa just feels clunky, yet Sony’s cans had no trouble auto-pairing with the last known device whenever I turned them on.

Sony’s ability to continue improving its WH-1000X series of wireless headphones is largely thanks to its dedicated acoustics research, which currently leaves rival makers of premium noise-canceling cans with much work to do to get anywhere near the same quality.

The customizable and adaptive NC smarts prove Sony’s tech has come on in leaps and bounds since the original MDR-1000X model, while improvements in battery life and sound quality make for a well-rounded listening experience. If the company can just take a leaf out of Bose’s book and add dynamic device switching in the next version, they’ll be virtually untouchable for a long while to come.

Note: Sony supplied the WH-1000MX3’s to MacRumors for the purposes of this review. No other compensation was received.