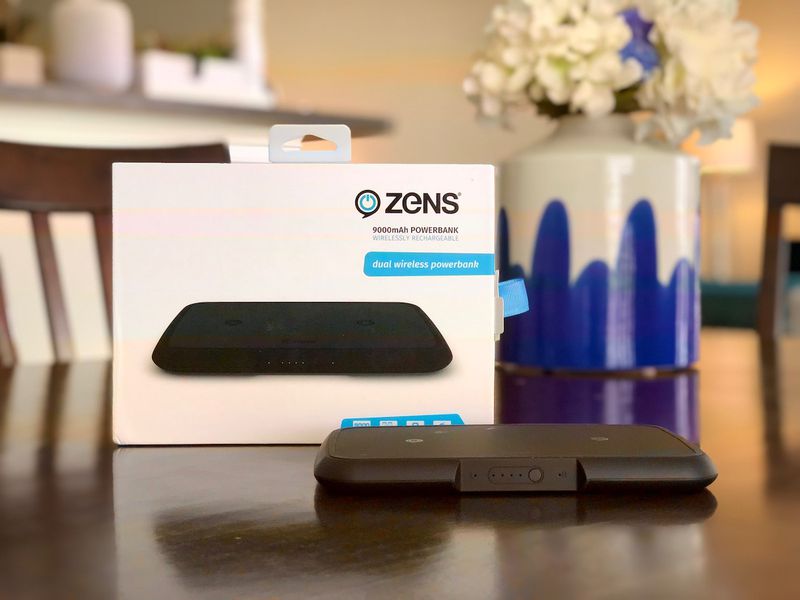 Last fall I had the chance to take a look at ZENS’ all-new Dual + Watch Wireless Charger, which offers spots to charge two Qi-enabled smartphones and one perch for the Apple Watch. I came away quite liking the accessory, which should be a great charging hub for anyone in a two-person household, and now the company has launched a companion accessory called the ZENS Dual Wireless Powerbank.

This device is a portable battery pack that itself includes two spots for wirelessly charging an iPhone 8 or later (or any Qi smartphone), similar to the design of the Dual + Watch stand. The Powerbank has a 9,000 mAh battery, two USB-A ports, and one USB-C charging port on the rear (USB-C to Lightning fast charging is not supported). The device itself also supports wireless charging, so you can place it on the Dual + Watch stand without needing to mess with wires to fuel up the Powerbank more easily.

ZENS mirrored the design of the Dual + Watch Stand for its new Powerbank, and both accessories have a nice rubberized texture on the mat where you place your ‌iPhone‌. Instead of aluminum on the sides like the stand, the Powerbank has a plastic enclosure that still has a nice heft to it. 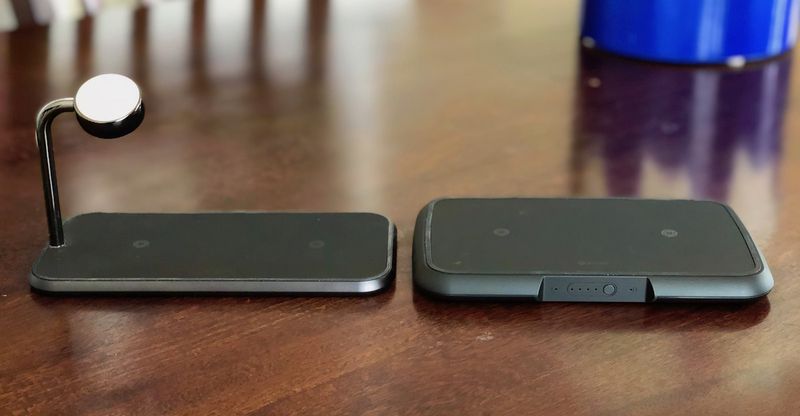 Just like the stand, I really like the simple design of the Powerbank. Black isn’t usually a color I opt to use in stands as big as the ZENS Dual + Watch, but I’ve been using it since I reviewed it last October, and the only downside I’ve come across in the past few months is that it is definitely a dust and fingerprint magnet.

Unless you’re okay seeing dust and smudges collect on the black surface, it’s something you’ll probably be wiping down multiple times a week, and the same goes for the new Powerbank. 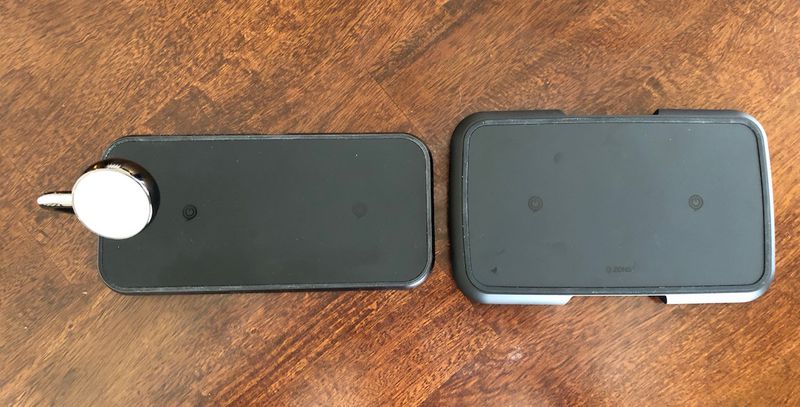 Although the two are design companions, there are some quirks when using them together. You can’t place the Powerbank onto the stand in such a way that it takes up both Qi hotspots on the stand. This will cause the stand’s lights to blink rapidly until you move the Powerbank so it rests only on one hotspot, at which point it will begin charging.

This makes the hunt to find the right angle to recharge the Powerbank a bit awkward, since it’s got more width and length than the stand and always hangs off the side no matter which way you charge it.

Incorrect placement (left) and correct placement (right)
As a bonus, you can charge the Powerbank on any Qi-enabled wireless charger, so if you already have a bunch of mats lying around your house it’ll be super easy to place the ZENS accessory down and fuel it up, although this process does take a lengthy amount of time.

When charging, the front-facing LEDs light up to indicate its status, and you can press the button in this area to bring up the LEDs when it’s not charging and discover how much battery is left. I found the Powerbank’s lights to be fairly soft and unobtrusive during the night, just like the Dual + Wireless stand.

Once it is charged, the 7.5 x 4.5 inch Powerbank isn’t exactly a svelte accessory to carry around, so you’ll really need to get your use out of its wirelessly charging on-the-go features to justify traveling with the device. Otherwise, there are numerous power banks that are smaller, more portable, and cheaper than ZENS’ option, at the sake of not having Qi-enabled surfaces.

Because of its size, I opted not to bring the ZENS along with me on a recent trip over the holidays, but I have found a neat use for it as a mainstay on my living room coffee table. I’ve always wanted to place a Qi charger here, but its location means wires would be dangling in walking paths so it wasn’t an option.

Having a mat I can easily reach to top off my ‌iPhone‌ while I’m watching TV or playing PS4 has been convenient, but topping off is the key here, because completely fueling up an ‌iPhone‌ wirelessly on the Powerbank will very quickly drain its 9,000 mAh battery. 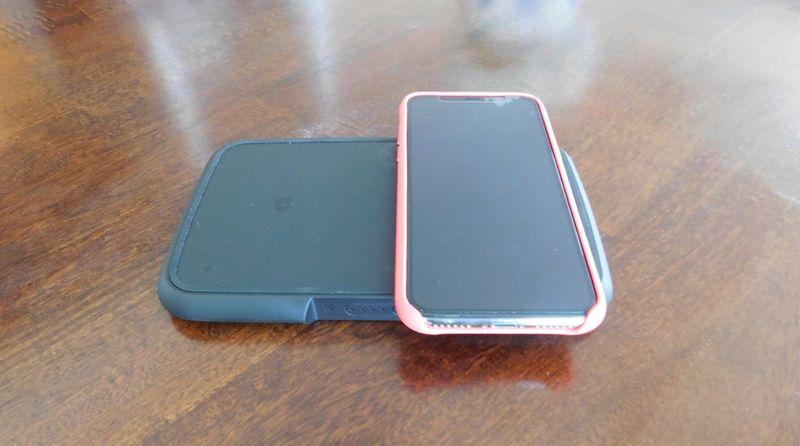 The second test fared similarly, but provided slightly more charge to my ‌iPhone‌ X with two full charges and one half charge before the ZENS died. Given the wireless charging feature of the Powerbank, battery waste is likely a factor to consider, meaning that the full potential of its 9,000 mAh battery would not directly correlate perfectly to the ‌iPhone‌ X’s 2,716 mAh battery. 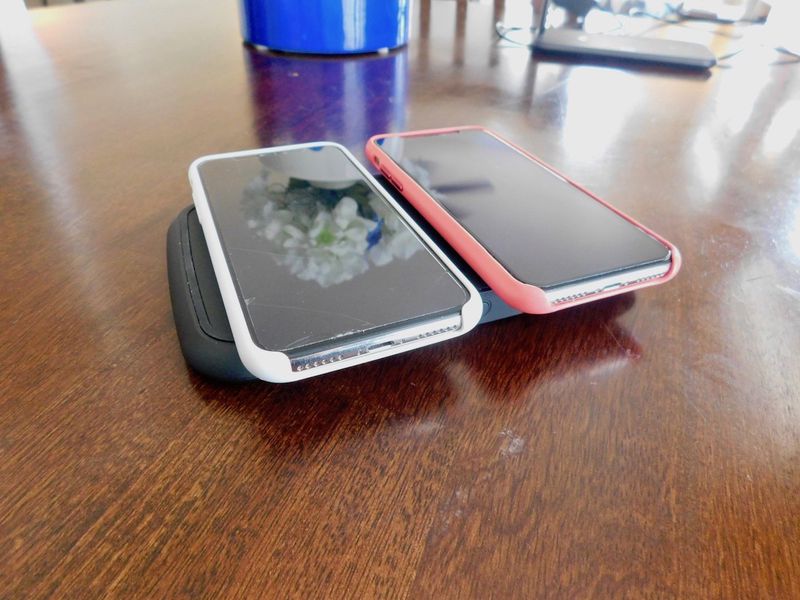 I contacted ZENS to make sure there were no faults with my specific unit, and the company informed me that when you take battery loss into account, about 2.5 charges for an ‌iPhone‌ X is expected. Still, just about two wireless charges feels low for the Powerbank, and unfortunately this number was around the same even for direct USB-A charging. I was able to charge my ‌iPhone‌ X twice through a USB cable connected to the Powerbank, and at some point in the third charge the device died and fueled up my ‌iPhone‌ X to about 30 percent.

The ZENS Dual Wireless Powerbank sports the accessory maker’s quality craftsmanship, but the device as a whole disappoints too often in its main purpose to recommend it as an addition to your suite of travel charging tools, unless you really need dual wireless charging capabilities. 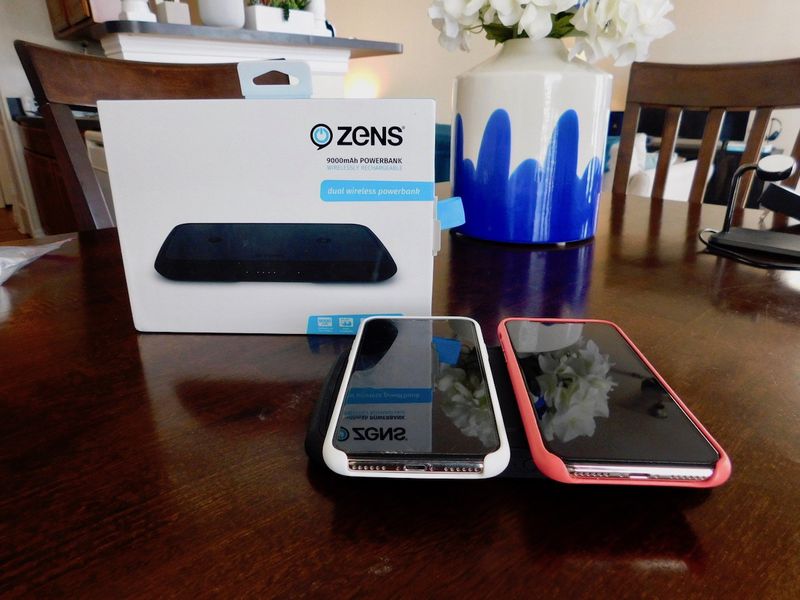 Wireless charging is still a novel addition to portable battery packs, but there are many cheaper and smaller 9,000 mAh battery packs on the market that make the €79.99 Powerbank from ZENS feel very steep.

ZENS provided MacRumors with the Dual Wireless Powerbank for the purpose of this review. No other compensation was received.