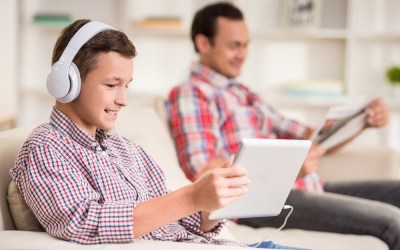 If you own an Android phone or tablet, there are plenty of motorbike game titles you can play for free. They are somewhat hard to find, so we’ve come up with a list here compiling the best motorcycles games for Android devices.

All of these games are available on the official Google Play Store, and you will be provided with a link for each one of them.

Riding straight into it (pun intended), take a look at all these cool motorcycles games for Android. You can click on the hyperlink in a game’s name if you want to download it immediately. All reviewed games are completely free.

Asphalt 8 is hands down, one of the best racing games ever made for Android. It has great graphics, tons of action, and it features both cars and motorcycles. There is already a newer installment of the game, Asphalt 9, but its predecessor still holds the crown.

There is a multiplayer mode where you can ride motorcycles and perform stunts to get nitro boosts. Also, you can get brand new parts and upgrades for your bike, as well as plenty of customization items.

True motorbike fans will adore this racing game. The only downside is the memory this game consumes, due to its pretty graphics. Don’t worry if you experience some frame drops, this isn’t unusual even if you are gaming on a brand new flagship class phone.

SBK16 is another motorcycle game for Android with beautiful graphics. Also, it features a great soundtrack. The bikes in this game are authentic to their real counterparts which is awesome.

There is even controller support, and if you are a fan of racing games, you know they are best experienced with a vibrating controller. Additionally, there are four maps which add just enough variety so the game doesn’t become boring.

Speaking of variety, there are also four gameplay modes. They are all self-explanatory, you can choose between test ride, quick game, time attack, and championship.

Unfortunately, this game also suffers from some performance issues.  Just a warning, your phone might get hot and occasional frame drops are possible. 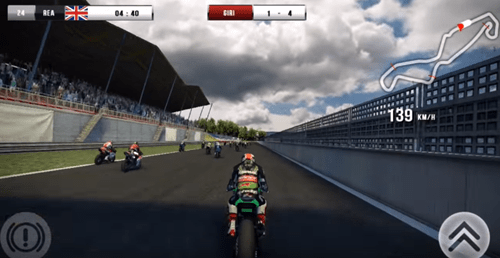 Traffic Rider is a very popular moto race Android title, with a great ratings and over six million downloads. The best part about this game is its authenticity. There are over 25 real bike replicas you can ride, and you can further customize and upgrade them.

The sounds of these bikes are recordings of their real-life counterparts, a feature which shows the immense dedication of the developers.  The graphics are decent, although not the best around. Another great part of this game is its story mode.

You can play as much as 70 missions, which is more playtime than you get with most mobile games. You can never run out of gas, which gives you more freedom to drive as fast as you like. Finally, there is a global leaderboard if you feel like competing with other players.

Racing Fever: Moto is a motorcycle game with clean graphics and solid performance. There is enough variety, you can choose from a roster of 16 bikes. The bikes vary in speed And you can also customize all of them.

There is a police escape mode, which will remind some people of Grand Theft Auto. Another nice feature is that there are plenty of camera angles to choose from. Overall, the game is well optimized and you shouldn’t experience any bugs, glitches, or stutters.

People who played this game say they got addicted verhttps://www.novodasoftware.com/y fast and they couldn’t stop playing for hours on end. 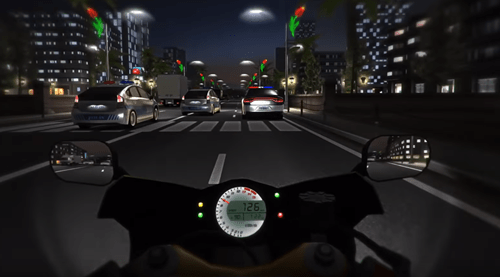 Racing Moto is one of the oldest motorcycle games for Android, which isn’t a bad thing. It is very simple, with basic controls and gameplay. You tilt your phone to control the bike and steer, and you tap to increase speed.

Even though you can only choose between three bikes, it is still very fun and addictive. There aren’t many modes or features, but it is far from boring. Actually, it is a difficult game with a progression system. The further you get the harder it becomes.

This game is very lightweight and you can play for hours. Your phone won’t feel it as it is superbly optimized.

Bike Race Free is a very popular and simple motorcycle game for Android. It is two-dimensional, but it still very fun and challenging. You can even play it with your friends, which makes this game  even more fun to play. The game also features plenty of missions and tracks.

This game is actually very difficult, so don’t give up after your first try. Recently, the tournament mode was added in a bid to increase the game’s appeal to gamers who like to compete. Optimization is fine and you shouldn’t experience any performance issues.

Gravity Rider is an interesting 3D motorcycle game for Android. It takes place in space, and it is sometimes very difficult due to in-game mechanics. The controls are easy, and you will hardly ever get bored while playing this game.

The graphics are very nice and your eyes won’t get tired of looking at this game. However, the biggest downsides of this game are the aggressive ads which sponsor this free game.

Customization is also very good, the featured motorcycles are cool and you can upgrade them to fit your style. Some levels in this game are difficult to beat, which adds to the challenge.

This brings our list of best motorcycle games for Android to the conclusion. Which game is your favorite and why? Tell us in the comments. By the way, remember that these games are highly addictive, don’t let them make you skip school or work.

Also, crashes and performance issues are common in some of these games, don’t let that discourage you. You can try some of the less demanding games if you have an older Android model.